Party leaders careful not to alienate voters with pipeline stances 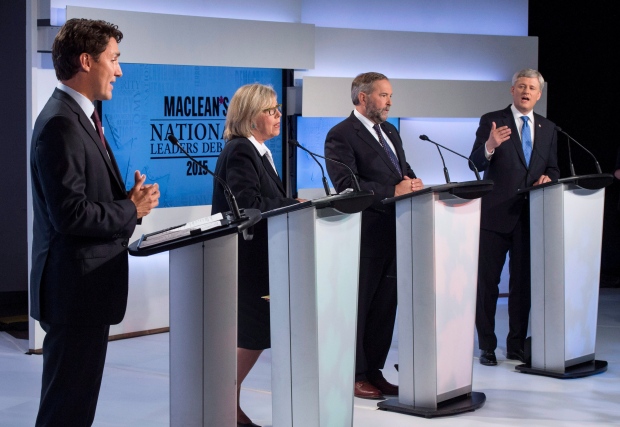 MONTREAL -- A week into the federal election campaign, party leaders are treading carefully around pipeline politics as they try to build support from an electorate divided on the country's energy future.

The campaign comes as Canada renegotiates its energy policy and Canadians debate whether to expand the oil and gas industry to boost the economy or dramatically scale back production to reduce greenhouse gas emissions.

Trevor McLeod of the pro-pipeline Canada West Foundation says he doesn't believe party leaders will engage Canadians in a thoughtful and nuanced debate on energy.

"We should have that discussion, but do I think we'll have it?" he said." No. There is little room for nuance in an election campaign and I don't think there will be a serious and authentic debate."

Brent Patterson with the Council of Canadians, a lobby group that opposes the expansion of Alberta's oilsands, also doesn't think the campaign will offer Canadians a clear vision for the future of the country's energy industry.

"It's still early but perhaps the odds are against there being a meaningful conversation about pipelines," he said.

It's not difficult to understand why.

Major oil and gas projects either approved or proposed have met with intense opposition from First Nations communities as well as activist and environmental groups across the country.

Many don't want any more pipelines -- period. Therefore, any reassurances about state-of-the-art technology to mitigate risks of spills are a non-issue for many.

And support for new pipelines is lukewarm at best in vote-rich Quebec but strong in Alberta, Saskatchewan and in parts of Atlantic Canada.

Many anti-oilsands activists point to a January 2015 peer-reviewed, academic article in the journal "Nature" that said about two-thirds of the world's fossil fuel reserves -- including the oilsands -- must remain unburned by 2050 in order to limit global warming to two degrees Celsius.

Oilsands proponents counter that new pipelines won't necessarily increase production because resources would still get to market by other means such as rail.

Moreover, pro-oilsands groups note that Canada's overall greenhouse gas emissions -- the leading cause of climate change according to scientists -- represent about two per cent of the world's output.

Saskatchewan Premier Brad Wall said during an interprovincial climate change meeting in April that for Canada to focus on dramatically cutting back its emissions is "playing on the margins."

While virtually all the major fossil fuel-based project proposals are controversial, TransCanada's Energy East pipeline is particularly sensitive because the pipeline's projected route goes through several provinces, including Quebec.

Energy East would bring 1.1 million barrels of oil a day from Alberta and Saskatchewan to refineries in New Brunswick for export overseas.

While the Conservatives have said they are favourable to the project pending a review by the National Energy Board, the Liberals and the NDP have so far not taken a firm stance on the pipeline.

NDP Leader Tom Mulcair and Liberal Leader Justin Trudeau both say they don't trust the current federal pipeline review process and have pledged to introduce what they claim will be stricter and more thorough analyses of proposed energy projects.

Trudeau says, if elected, he'll put a price on carbon while the NDP favours a cap-and-trade system, which would also price greenhouse gas emissions.

The NDP knows it has to watch what it says in Quebec about Energy East because the party is fighting hard for votes against the Bloc Quebecois, whose leader Gilles Duceppe has already accused Mulcair of being anti-pipeline when he speaks to Quebecers but in favour of it when he speaks elsewhere in the country.

Meanwhile, the Conservatives recently pledged to reduce Canada's greenhouse gas emissions by 30 per cent from 2005 levels before 2030 -- but are looking for the provinces to do the heavy lifting.

None of the three major parties, however, has outlined exactly how Canada can expand oilsands production, build new pipelines and at the same time comply with strict emission-reduction targets.

"We need to find the reductions somewhere," she said. "Are we going to allow the oilsands to expand and force other sectors of the economy such as transportation and manufacturing to do more than their fair share? Our perspective is that it's the wrong choice."

He added, however, that current party leaders aren't offering a clear vision for the future of the country's energy industry.

"I'd advise each leader to be clear enough on pipelines that they can claim they have a mandate to execute their vision after the election," he said.