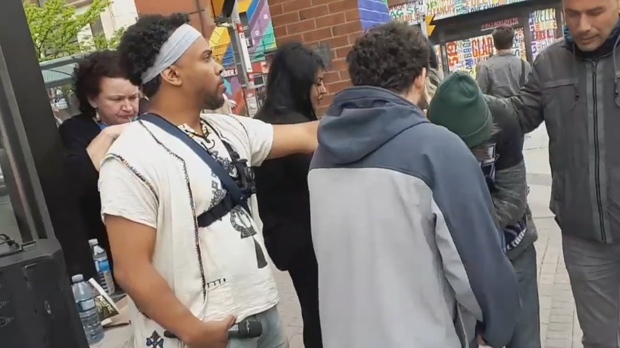 David Lynn (white bandana) is seen in the Church and Wellesley Village on June 4 in a screengrab from a video released by his supporters.

A pastor who was charged with disturbing the peace while preaching with a loudspeaker in the Church-Wellesley Village on Tuesday night is out on bail, and says he is the victim of state discrimination against Christians.

Police responded to a call about a disturbance in the Church and Wellesley neighbourhood shortly before 6 p.m. Tuesday evening.

Video posted online shows pastor David Lynn speaking into a microphone at Church and Wellesley streets and saying that he is “coming out as a Christian.”

He begins approaching various people to ask if they would tolerate him. When one man asks him to go away, Lynn calls him a bigot.

When others approach to tell Lynn that he is disturbing them, he calls them “hateful.”

After more community members arrived, Lynn was seen arguing with them and his supporters, before police eventually arrested Lynn.

After his release, the 39-year-old pastor said being at Church and Wellesley was just another stop on his map of Toronto, and he and his supporters had been at Kensington Market and Queen and Sherbourne earlier.

“I didn’t know this was the start of the pride month…I didn’t say anything specific to the LGBTQ community, it’s all on live stream,” he told reporters at College Park.

He said he feels as if he is being discriminated against for being Christian.

“It’s unfortunate that I am subject to this kind of discrimination and bullying and marginalization simply for saying God loves you, there is hope for you, I accept you and tolerate you. I shouldn’t be in this position, I didn’t do anything illegal.”

He said that he was assaulted during the encounter Tuesday but police at the scene refused to hear his complaint.

“It looked as though they had an event waiting for me, and they had some form of hatred against me,” Lynn said.

The confrontation follows a similar incident that occurred in the same location on May 1, where a man shouted offensive terms at people walking by.

Lynn said he has no affiliation with the individuals who participated in the May 1 incident.

The pastor spent the night in custody and appeared in court at College Park on Wednesday, where a judge released him on bail under conditions he not be anywhere in an area bounded by Bloor Street, Yonge Street, Carlton Street and Jarvis Street.

He also cannot use an audio amplifier that would allow his voice to be heard in that area.

He must also stay away from any location where a Pride Month event is taking place.