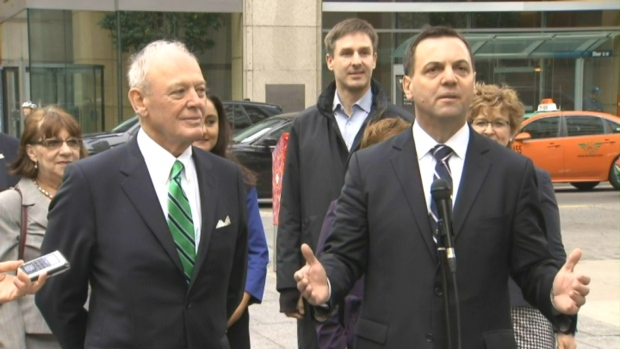 Progressive Conservative Leader Tim Hudak says he will immediately start building subways in the Toronto area if elected and won’t hike taxes to cover the cost.

Hudak made the promise while flanked by MPP Doug Holyday and a number of Progressive Conservative candidates at a campaign style event outside a busy Bloor-Yonge Station Monday morning.

Toronto’s rapid transit network is urgently in need of expansion with overcrowding on the Yonge subway line expected to worsen in the coming decade, according to a staff report.

Because of increasing pressure on the Yonge subway line and congestion at Bloor-Yonge station, a relief line that runs through the southern portion of downtown Toronto is recommended to keep pace with growing ridership, but that line could cost $3.2 billion, money the city simply doesn’t have.

“The subway is a great way to travel but the more packed it gets the less people take it,” Hudak said Monday. “That’s why we have a plan to actually invest in our subways but the last thing we want to do is increase taxes like the Liberals and the NDP want to do. We need to actually grow our economy and with steady pay checks people will pay steady taxes so we can build the subways we need here in Toronto.”

The Liberal government has contributed $1.4 billion to the cost of expanding the Bloor-Danforth subway line into Scarborough and Premier Kathleen Wynne is expected to discuss how revenue tools could help further subway expansion during a event at the Toronto Board of Trade later today.