One pedestrians is dead and another is in hospital with serious injuries following a collision in Concord.

It happened on Dufferin Street, north of Steeles Avenue, at around 6 p.m.

According to police, two vehicles collided, sending one into a hydro pole. The pedestrians were struck by the falling pole which snapped after being struck by the vehicle.

“At this time, we haven’t yet completed next of kin notifications,” York Regional Police Insp. Stu Betts said at the scene.

No information on the gender or age of the deceased was provided.

According to Betts, a number of bystanders at scene tried to help the injured pedestrians.

“We did have a number of pedestrians who were here at the scene who were trying to provide assistance to those that were injured,” he said.

Three passengers travelling in the vehicles have been transported to hospital with minor injuries.

The driver of one of the vehicles will be facing a charge of dangerous driving causing death, Betts said.

The area is currently closed as police continue to investigate.

“Right now (police) are reconstructing the scene to determine the facts, determine the speed, determine the manoeuvers of those vehicles, and of course what led ultimately to the death of this cyclist,” Betts said. 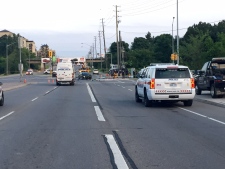 Police vehicles are seen on Dufferin Street in Concord following a collision that killed a cyclist on Monday, June 29, 2015. (CP24/Courtney Heels)