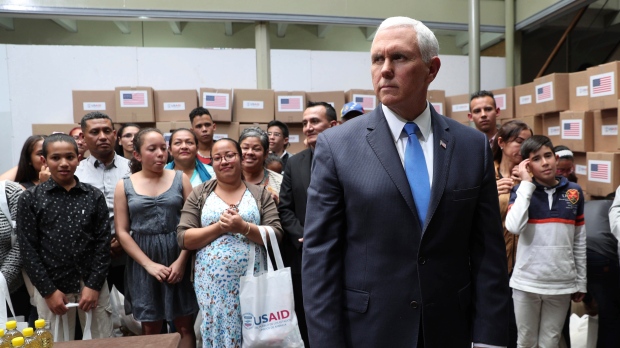 Vice President Pence stands in a room filled with humanitarian aid destined for Venezuela where he met with a group of Venezuelan migrants, in Bogota, Colombia, Monday, Feb. 25, 2019. A Canadian security expert says U.S. Vice President Mike Pence's call to allies today to give frozen Venezuelan assets to anti-Maduro forces could pump billions into the coffers of the country's pro-democracy movement. THE CANADIAN PRESS/AP/Martin Mejia

OTTAWA -- A Canadian security expert says U.S. Vice-President Mike Pence's call to allies today to give frozen Venezuelan assets to anti-Maduro forces could pump billions into the coffers of the country's pro-democracy movement.

Pence called on Canada and its Lima Group allies to do just that in a speech at their summit in Colombia, where Foreign Affairs Minister Chrystia Freeland and Canada's hemispheric allies are discussing the ongoing crisis in Venezuela.

Pence announced new sanctions on supporters of Venezuela's socialist leader Nicolas Maduro, as the U.S., Canada, its Latin American allies in the Lima Group and dozens of other countries seek to propel opposition leader Juan Guaido into power.

The Washington think-tank Inter-American Dialogue and the Centre for International Governance Innovation in Waterloo, Ont., have proposed repurposing the billions of dollars of assets seized from Venezuela's corrupt leaders to help countries coping Venezuelan refugees and to support Guaido's new government.

Fen Hampson, the executive director of the World Refugee Council and the head of CIGI's global security program, says Pence's proposal is a step towards that.

He says the billions in frozen assets could be used to help Maduro's victims, including the more than three million that have been forced to flee their homes because of the country's economic and political meltdown.