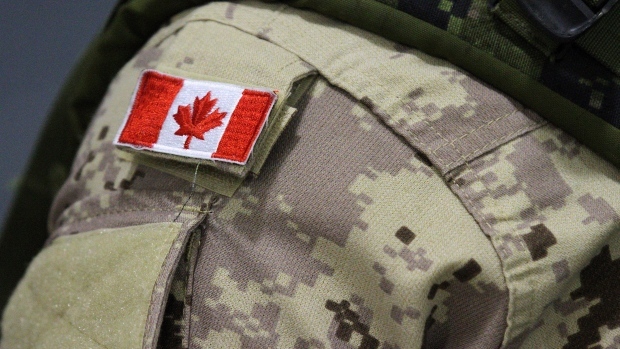 A Canadian flag patch is shown on the shoulder of a member of the Canadian forces at CFB Trenton, in Trenton, Ont., on Thursday, Oct. 16, 2014. (THE CANADIAN PRESS/Lars Hagberg)

OTTAWA - Canada's military pilots are in danger of losing their edge as COVID-19-related restrictions curtail their ability to train at home and abroad, according to a senior Royal Canadian Air Force commander.

Military pilots are required to fly a certain number of hours in the air to remain qualified for their aircraft, and typically participate in a number of international exercises each year to test their mettle and remain sharp for a potential conflict.

But Brig.-Gen. Iain Huddleston, who as director-general of air readiness is responsible for ensuring the air force has the equipment and personnel it needs, says that was before travel restrictions and other challenges emerged during the COVID-19 pandemic.

“Our capacity to train has been curtailed,” Huddleston said. “And that's going to be something we have to focus on in the next year, to figure out how to make sure that our personnel are properly trained on the other side of COVID to gain our edge back.”

The pandemic has also made it more difficult to source spare parts and conduct other maintenance activities on the air force's various fleets, Huddleston said.

“Obtaining parts to fix airplanes has been more challenging over the past year due to COVID,” he told The Canadian Press.

The air force isn't the only part of the military facing pandemic-related challenges, with impacts hitting everything from training to recruitment to the physical and mental fitness of those in uniform.

Acting chief of the defence staff Lt.-Gen. Wayne Eyre referenced many of these challenges in a recent message to the troops, in which he warned that “potential adversaries are not resting, and continue to expand their reach and test our resolve.”

To that end, the Canadian Army is planning to hold a scaled-down version of its largest and most important training exercise in Alberta next week after COVID-19 forced the cancellation of last year's iteration.

Exercise Maple Resolve, held each May at Canadian Forces Base Wainwright, typically involves 5,000 Canadian soldiers as well as troops from the United States, Britain, Australia and France.

The exercise also includes artillery, armoured vehicles and aircraft to simulate a large-scale military operation and is considered essential for ensuring the Army is ready to defend the country from attack or conduct a major overseas mission.

But this year's version will involve about half the normal number of troops, the vast majority from Alberta, Canadian Army spokeswoman Maj. Karina Holder said in an email. There will also be only a handful of soldiers from the U.S. and Britain.

All those participating will be required to follow strict public-health guidelines, Holder added, including a 14-day quarantine period for foreign troops.

“Once arrived, personnel will be moved immediately into the Wainwright, Alta., training area and not leave ... unless there is a requirement due to a medical emergency,” Holder said.

“However, as the situation is both fluid and prone to disruptions, we must remain flexible. The health, safety and wellness of our members and the communities where we live, train and operate are important.”

Meanwhile, an internal survey of military members conducted last year found many struggling to stay physically and mentally fit during the pandemic.

Almost half the nearly 20,000 service members surveyed late last spring by the Defence Department's research wing, the Defence Research and Development Corporation, reported that their physical health had gotten worse.

“A notable proportion reported engaging in increased levels of potentially negative health behaviours,” according to the survey report provided to The Canadian Press.

“This was especially the case for alcohol and cannabis use, and for consumption of junk food,” it reads.

About one-third of Armed Forces members also reported that their mental health had deteriorated during the pandemic, though only one in 10 had received some form of care.

This report by The Canadian Press was first published April 25, 2021.