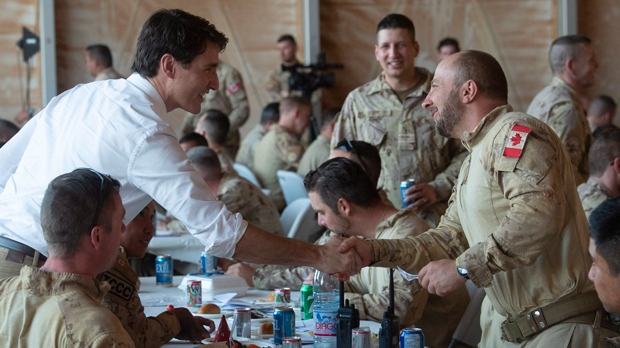 GAO, Mali -- Prime Minister Justin Trudeau praised the work of hundreds of peacekeepers during a surprise visit here on Saturday even as he defended his government's refusal to extend their mission several months to help the United Nations.

The visit to this hot, dusty camp in northern Mali was Trudeau's first since 250 Canadian troops and eight helicopters arrived this summer to begin providing lifesaving medical evacuations for wounded UN peacekeepers and workers.

It will also likely be the prime minister's only visit, as operations are currently scheduled to wind down at the end of July - even though the UN and some allies would like Canada to stay until Romanian replacements arrive in the fall.

Trudeau flew into Gao aboard a military transport plane - and under a veil of secrecy due to security concerns - with a delegation that included Defence Minister Harjit Sajjan and chief of defence staff Gen. Jonathan Vance.

The bright sun and hot desert air belied the fact that the prime minister's visit to this part of Africa was timed to coincide with a pre-Christmas celebration for the troops.

“We think often - and we hear this from Canadians - that Canada has a great history of peacekeeping,” Trudeau told the assembled troops after helping serve turkey dinners to them.

“But it wasn't just because we were nice and polite. It was always because we had consistently demonstrated the capacity to step up and punch well above our weight class - to make a significant and positive impact wherever needed around the world.”

The Mali mission is the culmination of years of political promises and military planning that started three years ago when Trudeau promised during the last federal election to renew Canada's involvement in UN peacekeeping.

While Mali was always seen as a likely destination for Canadian troops, the Liberals took years to commit - because of the mission's danger, and because Donald Trump's victory in the U.S. presidential election diverted the government's attention.

More than 175 peacekeepers have been killed in Mali since the UN arrived in 2013, including 22 this year, as drought, extreme poverty and an influx of Islamic militants from surrounding countries have led to escalating violence and insecurity.

Yet the Canadians have evacuated only six UN peacekeepers and civilian workers since August. Two civilians were seriously injured by an improvised-explosive device, but military officials say the other cases were non-critical.

One senior military official said the extreme violence that has gripped Mali for the past several years has shifted southward, away from Gao and toward the largely peaceful capital of Bamako, which the source acknowledged was a concern.

Trudeau nonetheless emphasized the importance of the Canadian mission, which also involves moving equipment and troops around Mali's sprawling, desolate landscape, saying it helps the entire UN peacekeeping effort in the country.

“They are able to do more because â€¦ this extraordinarily professional group of Canadians are here to give them the support should an incident happen,” the prime minister told reporters.

“That level of assurance allows for the entire mission to be more effective.”

Mission commander Col. Chris McKenna echoed that point, saying peacekeepers from other countries rely on the fact that quick medical assistance is available if they run into trouble.

“The confidence to drive on the roads here is guaranteed by the fact that someone is coming to get them,” McKenna said, referencing the fact that many of the injuries sustained by peacekeepers comes from IEDs and ambushes on convoys.

“So the way I characterize it to my soldiers every day is that we are the cavalry: If something bad happens, we are coming to get you.”

Yet there are concerns within the UN and among some allies that a gap will materialize when the Canadians cease operations at the end of July as their Romanian replacements may not arrive until October.

The UN has turned to civilian contractors in the past, but peacekeeping officials have been pushing for Ottawa to cover the gap, saying military aircraft are more flexible, cost-efficient and offer better emergency medical help.

“Canada extending ... provides both operational and financial benefits to the UN,” one UN official told The Canadian Press on condition of anonymity because of diplomatic sensitivities.

Trudeau, whose government has yet to deploy to the UN a promised transport plane to Uganda and a 200-strong rapid reaction force, said Canada and the UN are working to ensure a smooth transition.

“We are confident, and we are hearing from the UN that there is no concern about that gap being a problem,” the prime minister told reporters during a scrum in front of one of the three Chinook helicopters based in Gao.

“We are very much focused on delivering the absolutely best support we can and we are doing that, and we're going to be working with our partners to ensure that the transition goes as smoothly as possible.”

Asked whether the Liberals were worried that extending the mission into next fall could result in casualties at a time when Canadians are going to the polls, Trudeau said Canada is following the UN's process for making commitments and pledges.

Aside from thanking the troops for their service and sacrifice, Saturday's visit was also an opportunity for Trudeau to see Canadian peacekeepers in action, as the troops conducted a mock aeromedical evacuation.

Navy Lt. Jennifer Loye, a critical-care nurse out of 1 Canadian Field Hospital in Vancouver, said the peacekeepers were excited to showcase what they have been doing for the past several months.

“This for me, personally, is the culmination of all the training that I've done since I joined the military,” Loye said in an interview.

“I joined to be a nurse. I wanted to do this kind of thing. I wanted to be able to work with people and help people. I trained to be a critical-care nurse and now here I am doing the job that I want to do.”

Mali has been struggling to get back on its feet since 2012, when an alliance of nomadic tribesmen and Islamic extremists led a rebellion in the north of the country even as a military coup caused chaos in the capital.

A French military intervention helped restore order to the country, which was previously seen as an example for democracy in Africa, before the first UN troops arrived in 2013 to monitor the peace agreement between north and south.

Yet new problems have emerged as drought, extreme poverty and an influx of jihadists into the centre of the country have exacerbated communal, religious and ethnic divides, resulting in escalating violence that has left thousands dead.

Canadian Prime Minister Justin Trudeau is silhouetted as he walks in a hangar during a visit to Canadian Armed Forces personnel serving on the United Nations Multidimensional Integrated Stabilization Mission in Gao, Mali Saturday December 22, 2018. THE CANADIAN PRESS/Adrian Wyld