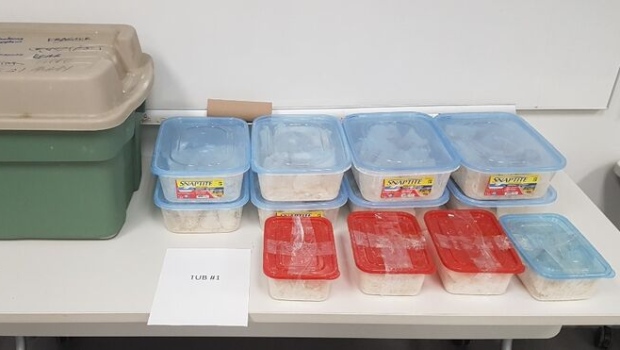 A large quantity of drugs seized during the dismantling of a clandestine methamphetamine lab in an Oshawa home are shown. (Toronto Police Service)

Police have dismantled a clandestine methamphetamine lab in an Oshawa home, seizing a large quantity of drugs with a street value that is believed to be in excess of $3.4 million in the process.

Members of the Toronto Police Service Drug Squad executed a search warrant at a residence in the Park Road North and Highway 401 area of Oshawa on April 27.

Police say that once inside the home they found a “make-shift chemical lab, capable of producing large quantities of crystal methamphetamine” that they say was being operated by the homeowner.

During the execution of the search warrant, officers seized 43 kilograms of crystal methamphetamine with a potential street-level value in excess of $3.4 million, five kilograms of Ketamine with a potential street-level value of $135,000 and three litres of GHB (gamma-Hydroxybutyrate ). Police say that a .32 calibre semi-automatic pistol loaded with six rounds of ammunition was also seized.

Four men were also taken into custody and are facing a combined 16 charges.

The suspects have been identified as Richard Alexandre, 56, of Oshawa, Richard Jansen, 36, of Burlington, Brendan Coates, 37, of Oshawa and Kyle Zettler, 34, of no fixed address.

“The Toronto Police Service want to remind the public that clandestine chemical drug labs can be highly volatile and are prone to fire, and even explosion. Illegal drug labs pose an immediate risk to public safety,” police said in a press release.