A teenage male who police say barricaded himself inside a Hamilton home after a toddler was found with “traumatic injuries” early Wednesday morning has been removed from the residence after an hours-long standoff.

At around 3:30 a.m. Wednesday, Hamilton police were called to a residence on Rymal Road East near Trinity Church Road for reports of a disturbance that had left a young child injured.

Paramedics told CP24 that a toddler was found at the residence suffering from “traumatic injuries.”

The child, who is believed to be 22 months old, was taken to hospital with serious but non-life-threatening injuries. They are currently listed in stable condition.

Police have not yet commented on the nature of the child’s injuries; however a neighbour who spoke with CTV News Toronto on Wednesday said that she appeared to have “many cuts to her body.”

Tara Young, who lives two doors down from the address where the arrest was made, said that she was awoken by the sounds of knocking on her door shortly after 3 a.m. She said that her daughter got to the door first and found three young people, including the injured toddler, in need of help.

“I heard extreme banging at the door. My 12-year-old was the first to hear it. She went to the door, seen a woman in distress and she opened the door, let them in and locked the door,” she said. “There was a gentleman chasing them. He had a knife and was trying to harm them.”

Young said that after her daughter let the victims into her home and locked the door, they observed the male with the knife chasing after someone else on the street. She said that she believes he then went to the home and barricaded himself inside.

In a news conference earlier in the day, Const. Jerome Stewart told reporters that shortly after arriving on scene, officers realized they were dealing with a “barricaded male.”

Police negotiators were sent to speak to the male in an effort to bring the situation to a "peaceful resolution," he said.

An armoured vehicle and officers from the tactical unit were also brought to the scene.

At 11:30 a.m., heavily armed tactical officers were seen carrying a 16-year-old male out of the home.

The male appeared to have zip ties on his arms and legs, and was placed on a stretcher, and then into a waiting ambulance. 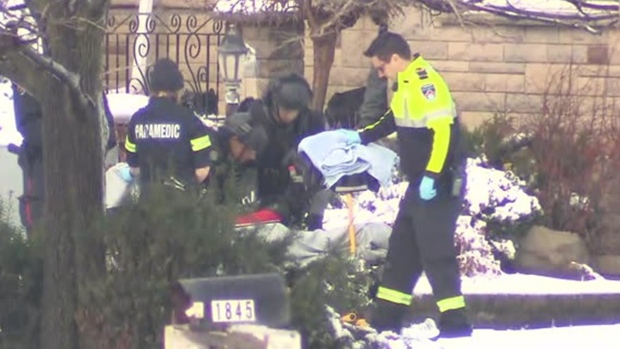 He was taken to hospital to be examined, Stewart said.

In a news release issued late Wednesday afternoon, policed said that they located the family dog deceased while searching the home. Police added that they believe the teen “is responsible for the dog’s death.”

Police have not said what charges the teen may be facing.

Investigators have also refused to disclose his relationship to the occupants of the home but confirmed that he is “known to the family.”

“Due to his age, I can’t get into specifics,” Stewart said.

Police also would not offer details about the nature of the child’s injuries and would not confirm reports that there were other children inside the home when the toddler was hurt.

“We need some time to continue onwards with this investigation,” Stewart said, adding that several witnesses still need to be interviewed.

Police said officers had the situation under control prior to the arrival of students and did not believe there was a threat to public safety.