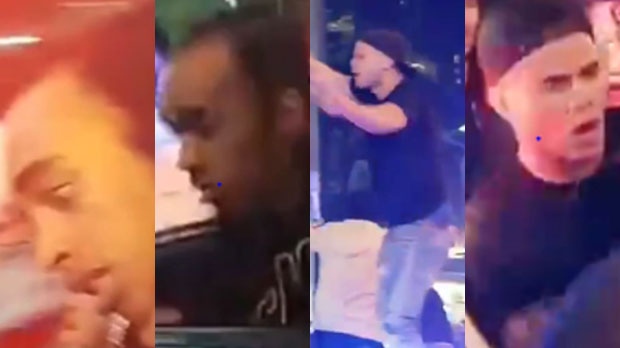 Police have released surveillance camera images of seven male suspects who jumped onto the roof of a cruiser as fans celebrated the Raptors’ Game 6 victory over the Milwaukee Bucks late Saturday night.

Police say that the cruiser was stopped in the Yonge Street and Dundas Street area at around 11:20 p.m. when several men jumped on top of it.

“People were excited, they were downtown, they were celebrating and unfortunately things got a little out of hand for a group who decided to jump on top of a police car,” Const. Allyson Douglas-Cooke said while speaking with CP24 on Wednesday evening.

Police say that an officer attempted to arrest one of the men when the crowd began to encroach on him. At that point one of the suspects threatened to kill the officer prompting him to seek safety, police say.

“Fearing for his safety, the officer let the suspect go and got back into his car,” police said in a news release issued on Wednesday afternoon. “The Toronto Police Service reminds people to celebrate responsibly and safely, and within the law.”

Thousands of fans flooded the streets after the Raptors historic win on Saturday night, including a large crowd that gathered at Yonge-Dundas Square.

Police previously said that there were no arrests, calling it an “impressive” result.

They may have spoken too soon, however.

“It's impressive. It certainly is. We're amazed -- police were there to keep the peace and that's exactly what happened,” TPS spokesperson Katrina Arrogante told The Canadian Press on Sunday.

Ahead of the Toronto Raptors facing the Golden State Warriors at home for Game 1 of the NBA Finals on Thursday, Douglas-Cooke said officers are encouraging fans to celebrate in a respectable manner.

“We don’t want you to hurt anybody or destroy our city.”

[Editor's Note: An image of the fifth suspect has been removed from this story as he has since been identified as a youth.]

The third suspect wanted in a police car investigation is seen in the first image from the left of this composite image while the fourth suspect is seen in the next two images. (Toronto Police Service)