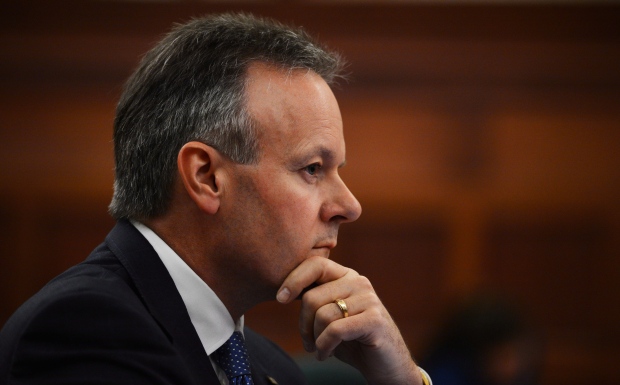 Governor of the Bank of Canada Stephen Poloz appears before the House of Commons Standing Committee on Finance on Parliament Hill in Ottawa on Thursday, June 6, 2013. (The Canadian Press/Sean Kilpatrick)

OTTAWA -- Newly minted Bank of Canada governor Stephen Poloz will deliver on Wednesday what will undoubtedly be the most-watched statement from the central bank in recent months.

Some have been urging the bank's policy council to drop what has become a stale tightening bias that goes counter to the easing positions of most of the world's leading central banks.

Last week, 10 economists who took part in the C.D. Howe Institute's monetary policy panel discussions are unanimous in urging the bank to keep its trendsetting overnight rate at one per cent -- but in an unusual move, four voted to jettison the warning about future rate hikes.

The rationale for dropping the bias is that it no longer reflects that the bank will likely hold its key interest rate at one per cent well into 2015, and more importantly, doing so might help the struggling economy.

Expectations of tighter monetary policies both in the U.S. and Canada have recently caused jitters in equity markets, as well as lifted bond yields and mortgage rates, while keeping the loonie artificially high. All three are bad for economic growth.

The Bank of Canada could likely pull back some of the loonie's gains, as well as impact longer term rates, with an unequivocal statement that it's on hold for a lengthy period of time, said David Madani, chief economist with Capital Economics.

"If you look at bond yields, they've really jumped up, so I think the Bank of Canada is going to be uncomfortable with what they are seeing, considering how vulnerable the housing market is and the high level of household debt," he said.

"What would be more constructive is a clearer signal of the future path of the policy (because) they are in absolutely no hurry to raise interest rates whatsoever."

The first announcement date since Poloz took the helm at the central bank will also give him the opportunity to separate himself from his famous predecessor, Mark Carney, and put his own stamp on the institution.

Wednesday's announcement, along with the release of the bank's quarterly monetary policy report, will provide Poloz with ample scope to make an early first impression.

So far, since taking over the reins on June 1, he has kept his cards well-hidden.

In two public appearances, before the Commons finance committee and a mid-June speech in Toronto, Poloz studiously avoided giving even a hint of his stance on interest rates.

He may continue to hold back Wednesday, says Bank of Montreal chief economist Doug Porter, if only because the event will carry so much weight.

"He's got to be very careful because in many ways, his first statement could label him for quite awhile," said Porter. "I don't think he wants to be pigeonholed as a hawk or a dove."

In a lengthy analysis to clients, Derek Holt, Scotiabank's vice-president of economics, found as many reasons for removing the bias as keeping it.

One likely explanation why Carney was reluctant to further cut interest rates, despite a stuttering economy and falling inflation, is that he feared it would have led to more Canadians taking on bigger debt.

This may not be such a concern in the current economy, now that home sales have moderated and credit accumulation has flattened.

Holt says the recent market reaction to possible signs from the U.S. Federal Reserve that it may be tapering its stimulus sooner rather than later, should give Poloz pause on making any sudden policy shifts.

"It would send a signal to the markets that the bank is priming for the next move to be a rate cut, and I don't think they want to be backed into a corner," he said.

Also, that could be as damaging and misleading of the central bank's real intentions as many critics contend is the case with the current forward guidance, Holt added.