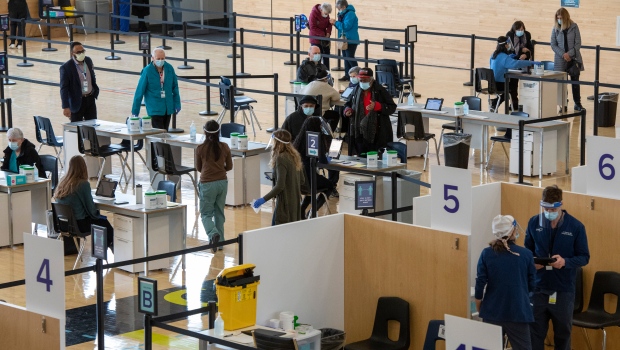 Eligible recipients get their COVID-19 vaccines at a mass vaccination clinic in Toronto on Monday, March 8, 2021. THE CANADIAN PRESS/Frank Gunn

TORONTO - Poor messaging and confusion over who is leading Ontario's response to the pandemic are undermining public trust in the province's COVID-19 immunization plan, crisis communications experts say.

The province is facing growing criticism over its failure to provide clear and timely updates on its ever-changing vaccine rollout plan - with leaders often making contradictory statements that leave the public confused.

Experts say the harm being done by disjointed communications could have a long-term impact on the province's goal of vaccinating millions of people over the next few months.

Josh Greenberg, a Carleton University professor who studies crisis communications, said the province did well during the early stages of the pandemic when Premier Doug Ford's messaging was simple. That, he said, is no longer the case.

“There do not appear to be any core principles guiding the provincial response and it's not clear from one day to the next who is in charge,” he said. “Is it the premier, the chief medical officer of health, general Hillier, or the regional health units?”

Greenberg said people just want to know when they're going to get the vaccine. The answer depends on many factors such as age and geography, and Greenberg said that is something the province has failed to explain clearly.

“We have almost no evidence of an overarching provincial strategy, just a series of tactical moves that seem to be changing weekly,” he said.

That could have serious consequences, said Jessica Mudry, an associate professor at Ryerson University who specializes in public health communication.

“If people don't trust the process, it's going to be a free for all,” she said.

On Friday, the head of the province's vaccine task force, retired general Rick Hillier, updated the public on the latest revisions to the rollout plan.

“... our aim would be to allow the province of Ontario to have a first needle in the arm of every eligible person who wants it by the first day of summer,” he told an afternoon news conference.

Hours earlier, the government had provided a briefing document that stated the plan was to start administering the vaccine to Ontarians aged 59 and younger in July, contingent on vaccine supply from the federal government.

Mudry said the province should have been planning and fine-tuning its public health messaging on the vaccine rollout months ago.

“This is not a time to be creative, this is not a time to let people's imaginations run wild,” Mudry said. “Giving people some concrete expectations as to when they can get the vaccine would be a very smart public health and health communications move but that has not been done.”

Duncan Koerber, an assistant professor at Brock University who studies crisis communications, said while the government's messaging has been inconsistent, it is dealing with an unprecedented situation.

“This will be the next textbook on crisis communications,” he said.

While the province may have started off with effective messaging on the need to stay home and follow public health rules, the longer the pandemic has dragged on, the more people notice inconsistencies, Koerber said.

There is also a lower tolerance for mistakes as COVID-19 restrictions continue, creating “ negative reputational residue,” for the Ford government, he added.

“This has been one long crisis,” he said. “If you make a mistake early on people let it go. ... but when you make another later, the perception is that it's a pattern and you get more and more of the blame.”

“I would say that we have a clear plan,” she said. “But this is a mammoth undertaking, as you can imagine, to make sure that everyone in Ontario who wants a vaccine receives one.”

Elliott said the province is trying to be clear in its communications while still leaving the rollout up to local public health units.

“There are so many factors and considerations here,” she said. “What we did on Friday was lay it out for people so that they can understand.”

NDP Leader Andrea Horwath said the government has bungled communications throughout the pandemic and that continues during the “messy, sloppy and confusing” vaccine rollout.

“We don't have the confidence in the government's vaccination plan,” she said. “It changes pretty much every day.”

This report by The Canadian Press was first published March 9, 2021.