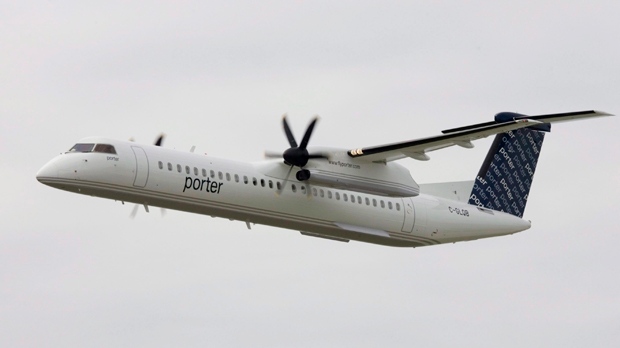 A Porter Airlines plane flies over Toronto in this file photo. (The Canadian Press/Adrian Wyld)

WestJet (TSX:WJA) said its load factor for December hit a record 81.9 per cent while Air Canada (TSX:AC.B) hit record load factors for the month and the year.

Montreal-based Air Canada said its load factor rose to 82.1 per cent last month while the full-year number was 82.7 per cent, up 1.1 points in each case.

Analysts monitor load factor as a measure of how much total fleet capacity is used by an airline to carry passengers.

"These strong results, for both the month and full year, underscore the effectiveness of Air Canada's disciplined capacity management and our award winning product," stated CEO Calin Rovinescu.

That was a strong finish to a generally good year for Canada's largest airline, which saw 2012 passenger traffic rise 2.6 per cent over 2011.

WestJet's passenger traffic in December was up 7.2 per cent from a year earlier, rising to 1.6 billion revenue passenger miles from 1.5 billion on a six per cent increase in capacity.

For the full year, WestJet's passenger traffic was up 7.1 per cent to 4.5 billion RPMs from 4.2 billion RPMs as it flew 17.4 million passengers in 2012, an increase of 8.6 per cent or nearly 1.4 million additional passengers.

"We are very pleased to close out the year with six consecutive monthly load factor records and record high loads in all four quarters," stated president and CEO Gregg Saretsky.

He said the Calgary-based airline's forward bookings continue to be strong.

The regional carrier serves about a dozen cities in eastern Canada and several U.S. destinations from its base at Toronto's Billy Bishop Toronto City Airport, where it competes directly against Air Canada's service operated by Sky Regional Airline.

Porter said its December load factor was 64.3 per cent, with 77.8 million revenue passenger miles -- an increase of 3.5 per cent a year earlier, on a 2.9 per cent increase in capacity.

"Overall, Porter has finished 2012 by solidifying our gains for passenger numbers and load factor through the year," said CEO Robert Deluce.

However, Porter faces a looming deadline for finalizing a first contract with the union that represents 22 employees at the airline's base at the Billy Bishop airport, which is on one of Toronto's lakeside islands.

Local 343 of the Canadian Office and Professional Employees union will be in a legal strike position at 12:01 a.m. Thursday. COPE says the two sides are scheduled to meet on Wednesday.

"We sincerely hope to be able to prevent a strike and unnecessary inconvenience to the travelling public," said COPE staff representative Mary Stalteri.

Cameron Doerksen of National Bank Financial said Air Canada's strong traffic numbers in December resulted from improvements in most travel segments. The only load factor decline was the Pacific, dropping to 85.4 per cent from 87.1 per cent last December.

"The record December results highlight that overall air travel demand remains healthy across the geographic segments," he stated in a research note.

On the Toronto Stock Exchange, Air Canada's shares gained five cents, or 2.82 per cent at $1.82 in morning trading, while WestJet's shares were down two cents at $20.19.