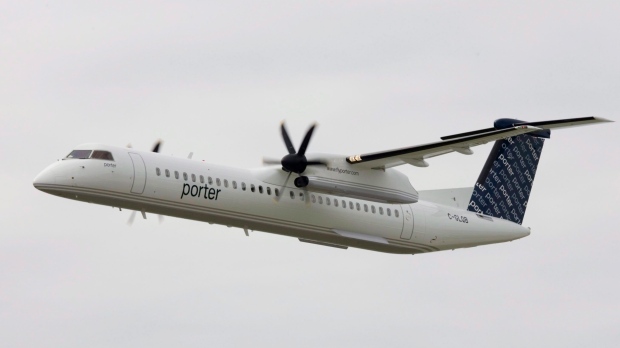 The first Porter Airlines plane does a fly past at the city centre airport in Toronto, Tuesday Aug. 29, 2006. (Adrian Wyld / THE CANADIAN PRESS)

Porter Airlines has pushed back its target for resuming operations yet again amid strict new rules for travellers returning from abroad.

The Toronto-based airline had set March 29 as its latest target for resuming flights but it now says that it won’t take the skies again until at least May 19.

The latest delays comes after a new federal government rule took effect, requiring that all flyers returning from international destinations spend up to three-days in a quarantine hotel while they await the results of a COVID-19 test.

“The implementation of more restrictive travel rules by governments since our last update makes an early spring restart unviable,” Porter Airlines President and CEO Michael Deluce said in a press release. “While there are signs of progress in containing the pandemic, it is necessary to reset our sights based on changing conditions. We remain optimistic that things are moving in the right direction, but it is possible that this tentative date may also need to be modified if vaccinations don’t accelerate to enable the easing of travel restrictions.”

Since then it has repeatedly pushed back its scheduled return to operations.