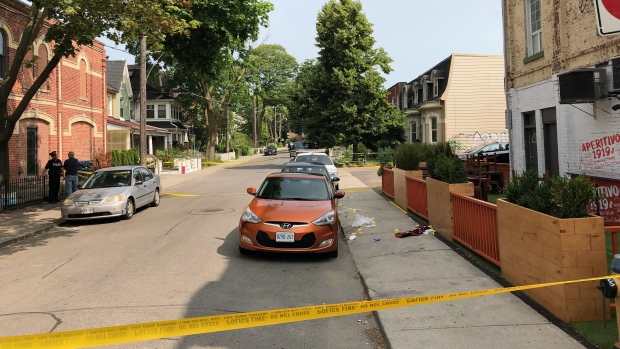 Three people were rushed to hospital with apparent gunshot wounds after a shooting in the city’s West Queen West neighbourhood early Monday morning.

Police responded to the corner of Queen Street West and Ossington Avenue at around 2:30 a.m. for a report of the sound of gunshots.

Insp. Anthony Paoletta tells CP24 that officers located three male victims suffering from gunshot wounds “in close proximity to each other” immediately upon arriving at the scene.

He said that all three were rushed to hospital with injuries ranging from “serious to more serious.”

No information has been released about potential suspects at this time.

“Toronto police are asking for the public’s assistance as we attempt to find out what happened here tonight,” Paoletta said. “I know that there are a lot of businesses with security cameras, we also have a lot of residential units and there were people out on the street at that time – it was a warm night out.”

The shooting took place along a busy stretch of Queen Street West that is littered with numerous bars and restaurants.

Though the circumstances leading up to the shooting remain unclear, police sources have told CP24 that there was some sort of altercation in a bar in the area that carried out onto the street immediately prior to shots being fired.

One man, who lives in an apartment that overlooks the shooting scene, said that he was awoken by the sounds of six or seven gunshots in quick succession.

He told CP24 that he initially thought the gunshots could have been fireworks but then heard a girl scream and looked out his window to see a man running.

“I went to go outside and as soon as I went out the door I looked over and it was right there,” the man, whose first name is Valentino, said.

Valentino said that he decided to go back into his apartment after realizing that a shooting had taken place because he was unsure whether the person responsible was still in the area.

He said that he is shaken in the wake of the shooting and is “still dealing with it.”

“I am so thankful that I didn’t leave my house because I could have got involved in something I wasn’t even a part of,” he said. “It is just pathetic that something like this would happen in our city.”

Queen Street West was closed from Ossington Avenue to Dovercourt Road as police combed the scene for evidence; however the roadway reopened at around 8:30 a.m.

Numerous officers, however, are still on scene.

Tory said that he plans to have a conversation with police about the West Queen West neighbourhood where the shooting took place and the public safety challenges presented by the “late night exodus of people” from bars and restaurants in the area.

Tory, however, said that he remains steadfast in his belief that in order to address violent crime, something needs to be done about the prevalence of handguns in the city.

“I will just say that the people that emerge from bars and places of entertainment early in the morning on many days of the week are a continuing challenge for us but the real problem is not people coming out of places like that whether they have had a lot to drink or nothing to drink,” he said. “The real problem is people carrying guns in their pockets in the city and deciding they are going to use them. I am quite fed up with that as I have been for some period of time and I find it completely unacceptable.”

Police are shown at the scene of a triple shooting investigation on Queen Street West on Monday morning.

Police tape is shown at the scene of a triple shooting near Queen Street West and Ossington Avenue on July 8.