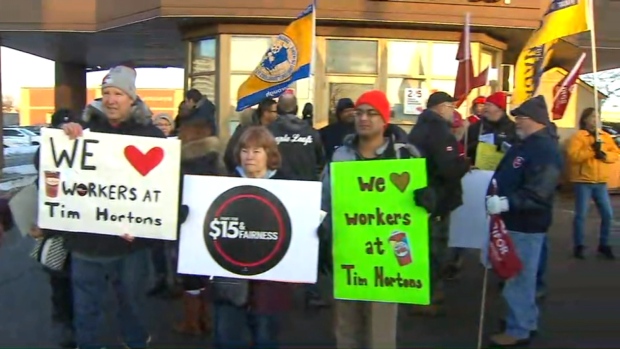 Protesters gathered outside select Tim Hortons locations this morning to speak out against some franchise owners who plan to hike benefit premiums and cut paid breaks following an increase in minimum wage.

Protesters are gathering outside multiple GTA Tim Hortons locations this morning to speak out against some franchise owners who plan to clawback paid breaks and employer-paid benefits following the increase in minimum wage.

Demonstrations are taking place today at several Tim Hortons restaurants across the province, including at least five locations in the Toronto area.

As of January 1, Ontario’s minimum wage increased to $14 an hour, prompting some Tim Hortons’ franchise owners to take measures to reduce their costs by targeting employee benefits and breaks.

The move has been heavily criticized by labour activists and Ontario Premier Kathleen Wynne, who accused some franchise owners of “bullying workers”

Despite the criticism, Ontario Labour Minister Kevin Flynn said the move does not violate the Employment Standards Act.

“We are here today to send a message to Tim Hortons as a corporation, as one of the richest corporations in the country.” John Cartwright, a spokesperson with the Toronto and York Region Labour Council, said at a protest near Markham Road and Lawrence Avenue on Wednesday morning.

“You have a power to send a directive to your franchisees, saying ‘Stop the punitive measures. Give workers all the benefits and the breaks they have, because they deserve it, they work hard.’ Tims is a Canadian product that Canadians love and you should reflect Canadian values and respect your workers.”

News of the clawbacks first came after franchise owners Jeri Horton-Joyce and Ron Joyce Jr. sent letters to their staff in Coburg indicating that they would be hiking benefit premiums and cutting paid breaks to make up for the wage increase.

A spokesperson with the Great White North Franchisee Association, which has defended the franchisees, told The Canadian Press that an average Tim Hortons franchise owner may be facing approximately $243,900 in additional costs in a single year.

“Tim Hortons made $3-billion in revenue last year and now some of the franchises are going to workers and saying, ‘Well you got a raise but now we are going to claw stuff back,’” Cartwright said.

“We should have a business model based on respecting workers and having everybody with a decent wage.”

“While our Restaurant Owners, like all small business owners, have found this sudden transition challenging, we are committed to helping them work through these changes,” the statement read. “However, Tim Hortons Team Members should never be used to further an agenda or be treated as just an ‘expense.’”

Speaking to CP24 on Wednesday, Ontario NDP Leader Andrea Horwath said she will be joining protesters in Coburg today.

“We know there are other employers that are embracing the new minimum wage and doing their best to show respect to their employees but these workers that we see in situations like Tim Hortons and other situations, it is just unacceptable,” she said.

“I’m going out to Coburg to stand with workers who have been waiting for this increase for a long time and to say that it is long overdue. So let’s do the right thing by these folks and make sure they have a decent quality of life.”

She added that if the NDP forms the next government, her party will work to close loopholes that “unscrupulous” employers are using to hurt employees.

“We know that there are some employers that are reclassifying employees as independent contractors. We don’t think that is right,” she said.

-With Files from The Canadian Press