Q and A: Building a cultural mecca along Bloor Street 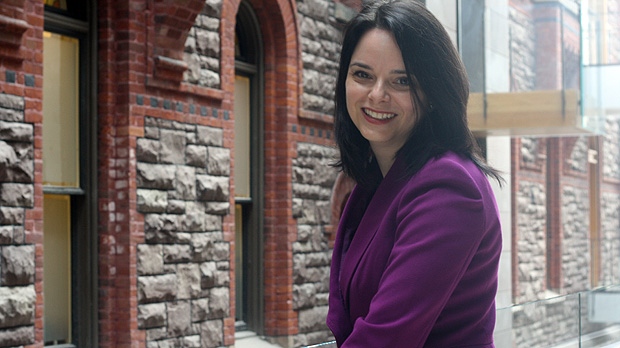 Heather Kelly is shown inside the Royal Conservatory of Music on April 3. Kelly is behind a new initiative to brand a 1.6 kilometre stretch of Bloor Street as the Bloor Street Culture Corridor. (Chris Fox/CP24.com)

Did you know that there are 12 world-class cultural institutions spanning a 1.6 kilometre stretch of Bloor Street?

Heather Kelly is betting that you probably didn’t but she is hoping to change that.

The director of marketing for the performing arts division at the Royal Conservatory of Music, Kelly is behind a new plan branding Bloor Street from Bathurst to Bay as the Bloor St. Culture Corridor.

Following the launch of the plan last week, CP24.com sat down with Kelly to talk about the inredible cultural diversity along Bloor and how she would spend a free day in the neighbourhood.

Q: How did this idea come about?

Q: One of the things that I think is kind of interesting about this is the extraordinary diversity that exists with some of the cultural organizations along Bloor. Obviously it is not intentional, but the area really does kind of encapsulate Toronto in some ways with the arts and culture of a tremendous range of cultures on display in a fairly dense area.

A: Yeah, you said it beautifully. That is exactly what I think makes the Bloor Street Culture Corridor particularly exciting and particularly unique. There are the communities because you know traditionally the Annex, Yorkville and U of T are considered separate areas and the Bloor Street Culture corridor really connects them and then of course there is the incredible cultural diversity where there is Jewish, Italian, Japanese, French and Aboriginal arts and culture all within a few blocks. Beyond that there is this great diversity in artistic genres with museums, art galleries, art talks, films and exhibitions. There is cultural diversity, there is artistic diversity and it is all layered in with these incredibly vibrant neighborhoods.

Q: Is this something the city has been lacking? We have the theatre district along King, but we really don’t have an arts district as a whole.

A: Well I think it is something that has been here but we didn’t really realize it. You know there is this great ‘a ha’ moment when people realize that there are a dozen arts and culture organizations along Bloor between Bathurst and Bay where their eyes actually light up. We have all been here for a while but I don’t think we have realized what we have had in a kilometre and a half stretch until now.

Q: So these are all very distinct organizations. What can something like the ROM do for the RCM or what can Hot Docs do for the Miles Nadal Jewish Community Centre?

A: We all are really different in terms of what we offer, how we function and our audiences and that’s part of the beauty of it. Because some of the organizations are larger and some of them are smaller we can offer something bigger and more enticing by putting it all together and as individual organizations we can introduce our own audiences to each other’s organizations. You know we (the Royal Conservatory of Music) have worked with the Istituto Italiano on Italian performances that happen at Koerner Hall and with the ROM (Royal Ontario Museum) announcing this new plaza that will really neighbour the RCM (Royal Conservatory of Music) while also leading people to the Gardiner Museum and the Japan foundation it is all going to sort of connect. We offer something bigger and more exciting together and we complement each other really nicely on an individual basis.

Q: Does art breed art? In other words could branding this area as a culture corridor and putting resources into getting the word out about that lead to even more institutions one day flocking to this part of the city?

Q: What is your perfect day hanging out in the Bloor Street Culture Corridor? Give me your itinerary.

A: I am a big fan of brunch so I would definitely start somewhere like L'Espresso Bar Mercurio which is right in the middle of the Bloor Street Culture Corridor. From there you go either direction, so maybe I would stop in and see the sneaker exhibition that is on at the Bata Shoe Museum and then pop into an art talk at the Istituto Italiano. Then I would go east to check out the ROM and the Gardiner Museum and then have a nice dinner and pop in to see the Kabuki prints exhibition at the Japan foundation. After that you got to end the evening with a concert at Koerner Hall. I mean that finishes it just beautifully. That’s just one day, though. Maybe if I had another day I could go the other way and pop into the gallery at the Miles Nadal Jewish Centre or even do a workout — I am a member of their gym — and then pop into the Native Canadian Centre. Thursday night there is a drum social, so it depends what day it is, but there is also a really great store there of Native made crafts and music and clothing and things like that. After that I could pop in to see Alliance Francaise‘s new building because it has just been renovated and opened and then head west and end the evening with a documentary at Hot Docs.

For more information about the Bloor Street Culture Corridor follow this link.

Q and A is published every Saturday on CP24.com