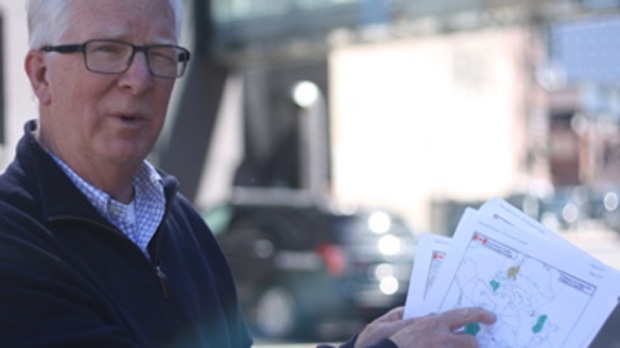 Dave Phillips points to some meteorological charts as he explains his role at Environment Canada. (Chris Fox/CP24.com)

Dave Phillips likes to say that he has about 30,000 weather stories and believe it or not he’s probably not exaggerating. As the senior climatologist at Environment Canada, Phillips has been in the meteorology game for more than 40 years and during that time he’s amassed a library of crazy weather facts, stories and trivia. With fall arriving on Sept. 22, CP24.com recently sat down with Phillips to talk about his role at Environment Canada, what we can expect this fall, why Canadians like to brag about the frigid conditions they face and how in a way the weather unites us all.

CP24: Tell me about your role at Environment Canada. What does a senior climatologist really do?

Dave Phillips: Well, I see my job as trying to keep conversations humming across the country and talking about the weather. I have had calls from people in bars betting on weather, I have had members of Parliament asking me tough questions having to do with weather in their constituency and I do a lot of talks, probably about 50 a year. I am sort of like the answer man when it comes to weather.

CP24: And with you it seems like it’s not just about the data; it is about presenting it in a way that’s going to excite Canadians rather than put them to sleep. You’re annual weather trivia calendar is probably just one example of that approach.

Dave Phillips: Yeah, it is something that is important to me. I think Canadians are passionate about the weather, but there is just so much competition for people’s time and so what I always say is that if you are going to tell them something serious it’s just not good enough to tell them about lightning killing people; sometimes you have to entertain them to the point that they say ‘Oh my gosh, I didn’t know that.’ Something like lightning hits men five times more often than woman or that the average sneeze is the same force as a category two hurricane, little things like that which make people say “Gee, I would like to learn more about that.’

CP24: Wherever you go in this country it seems that people have a saying something to the effect of ‘If you don’t like the weather, wait a minute.’ It’s almost like we take this odd sense of pride in bad, whacky weather. What’s your experience with that?

Dave Phillips: Yeah, I think you are right. I have travelled across this country, visited every province and territory, almost every climate region and this notion that if you don’t like the weather you can wait around for five minutes or drive five miles, people think it is unique to them. Well guess what everybody is saying that from Goobies, Newfoundland to Yoyo, British Columbia. Granted in Newfoundland there is a different twist to it where they say if you don’t like the weather out your front door look out your back door, but it’s the same idea you see. I think there are a couple things to it. Certainly we are the land of weather. A lot of people just get a dry season and a wet season, we get all of it. The other thing too is that it cuts across all sorts of statuses in society. It doesn’t matter whether you are a chief executive officer or mailroom clerk weather has affected you and you have a story and I think we like to brag about those stories. In Newfoundland the comment is not that it is a nice day but that it is a good day to be alive and of course in Alberta or in the Prairies they pride themselves on it (extreme weather) and they say ‘Those Torontonians wouldn’t know a blizzard’ and we all dump on Vancouver and Victoria. We say “Those wimps there don’t even own toques, balaclavas and parkas.” As Canadians we all think the same way. We like to comment on it, we like to brag about it and we like to use it as an excuse. How many times has it been our fault doing something and we blame the weather on it. I’ve done it. I remember not wanting to visit the in-laws and saying ‘Hey there is a nasty storm coming.’

CP24: In many ways it defines the Canadian experience I guess.

Dave Phillips: It really does. When we finally get around to defining who a Canadian is, somehow weather has to be in there. Our country was discovered with tough weather in mind, it was settled and developed with weather notions. We are the second coldest country in the world, we are the snowiest country in the world and we do have this reputation out there as being the Great White North and the land of ice and snow, but guess what we do get four seasons. We are the second most tornado prone country in the world, we get three million lightning hits and three or four tropical storms a year. It is not all about blizzards or face-numbing wind chill, we have a variety of weather and I think that is really what drives this fascination we have. There is nothing boring about the weather here.

CP24: Yeah and that certainly seems to be becoming increasingly true. Whether it was the deluge of rain that flooded the city back in July or a massive snowstorm back in February we have had lots of extreme weather lately to the point that I have ask if we can even call it extreme at this point. Is it just the new norm?

Dave Phillips: Almost, in a way. We have always had extreme weather but it seems more complex now. It beats us up more. It is almost as if our grandparents were able to deal with that weather. They didn’t have to pick up the kids from daycare, they didn’t have to go to that social meeting and they were more resigned to the weather. But now because we have changed the impacts have changed. There is a sense that the weather is also getting more extreme at the same time, but it is also getting more variable. For farmers in Ontario for example they used to always seem to get the weather they expected and now they are sometimes getting the wettest season followed by the driest. It is almost like normal weather doesn’t occur anymore and we plan everything on normal weather. We build hospitals and schools based on normal weather, we make holiday decisions based on normal weather and the government drafts policy based on normal weather. If it is not normal anymore maybe we are planning for something that’s not going to be the situation and that can cause a problem.

CP24: I guess that is where an organization like Environment Canada comes in. You can sort of stimulate a national discourse on where weather is going and how it will affect the way we live in the future.

David Phillips: That’s right. Not only for today’s weather and tomorrow’s weather, but for what Canada will look like 30 or 40 years from now. The past is not going to be a guide for the future. Now, I am a great optimist about the future. I don’t think the world is going to end in 2065 but I think we need to do things differently and I think we need to factor in more of the kind of climate we are going to see rather than the climate we have had.

CP24: With that in mind, I’d be remiss to not ask you what your forecast is as we begin the fall and head towards another winter.

Dave Phillips: The farther ahead you look the more difficult it is. I always say my definition of a Canadian is someone who worries about winter before summer is even over and already people are asking me about the winter. For the fall, I will say our models are calling for it to be normal or warmer than normal with very little precipitation, but here is the thing I am much more confident of: I think it is going to be a gorgeous colour change season. The trees loved the summer we had. It wasn’t necessarily hot, but it was warm and cool and if they could bottle that they would have it all the time. With the weather looking pretty good, it will almost be the perfect frame for a gorgeous picture of Ontario. It is nature’s gift to us and we don’t give enough credit to nature for this beautiful technicolor show where the landscape is ablaze in vibrant colours.

CP24: Last question and this one has nothing do with weather. What song are you kind of embarrassed to admit that you like?

Dave Phillips: I’d have to say that would be ‘Rain Drops Keep Falling on my Head.’