The Queen Elizabeth Way has reopened at Fairview Street in Burlington after a transformer fire created concerns about power lines falling onto the highway.

The closure went into effect at around 5 a.m., however hydro crews were able to repair the lines, allowing for the highway to reopen at around 7:10 a.m.

According to Halton Regional Police, power outages have been reported in the area. 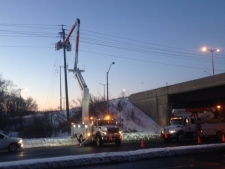