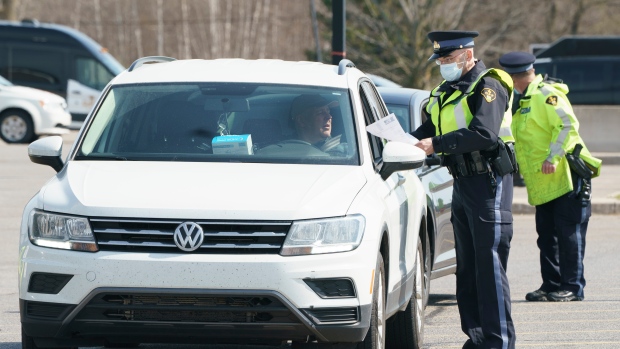 Motorists are screened at a police check point to limit non-essential travel from Quebec at the entrance of the province of Ontario on Highway 401 near Bainsville, Ont. on Monday, April 19, 2021. THE CANADIAN PRESS/Paul Chiasson

Ontario and Quebec have imposed new interprovincial travel restrictions in an effort to slow the surging COVID-19 variants that are putting increasing strain on Ontario's hospital system.

Starting today, travellers from Manitoba and Quebec cannot enter Ontario unless they live or work in the province, are transporting goods, or are travelling for health, compassionate reasons or to exercise an Aboriginal treaty right.

Quebec has enacted similar rules for its western border with Ontario, and is requiring anyone returning to their primary residence from that province to isolate for 14 days unless they fall under one of the listed exceptions.

The measures come as Ontario reports another 4,447 cases of COVID-19 amid worries that the province's intensive care units are struggling to keep up with a growing number of extremely sick patients.

The federal government announced Sunday that it was working with provinces that have not been as hard hit to fly health-care workers to help in the Greater Toronto Area's struggling ICUs.

Ontario and Alberta also announced Sunday that they were dropping the minimum age of eligibility for the Oxford-AstraZeneca vaccine to 40 from 55 to protect the population more quickly, while Quebec said it will announce a decision on lowering the age limit later today.

This report by The Canadian Press was first published April 19, 2021