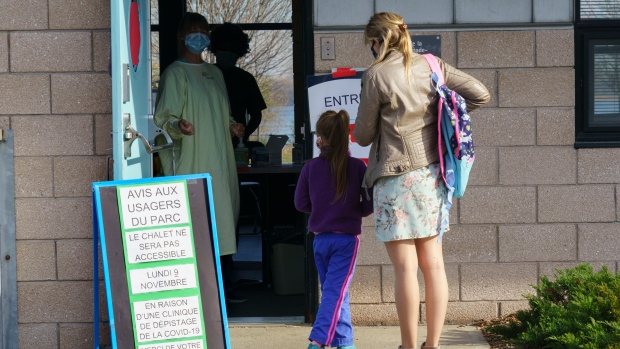 A nurse welcomes a mother and her daughter at a COVID-19 testing clinic in Montreal, on Monday, November 9, 2020. THE CANADIAN PRESS/Paul Chiasson

MONTREAL - Unvaccinated nurses in Quebec were already facing suspension without pay, and now the province's nurses order says their licences will also be suspended.

The Ordre des infirmieres et infirmiers du Quebec said Monday it will suspend the working licenses of its members who are not adequately vaccinated against COVID-19 starting Friday.

The order's decision came only a few days ahead of the province's Oct. 15 deadline, after which unvaccinated employees in the health sector face suspension without pay.

“I have a hard time understanding how there are nurses, with scientific training, who refuse to get vaccinated,” the order's president, Luc Mathieu, said in an interview with The Canadian Press on Monday.

“If I were a nurse, in the field, in a clinic with unvaccinated colleagues, I would feel uncomfortable for our patients, for myself, for our loved ones.”

More than 4,000 of the order's members had not been properly vaccinated and that the status of 5,716 others remained to be verified, according to Mathieu.

“Starting Wednesday, we will reach to them to make a last verification on their vaccination status and if they are not adequately vaccinated, they will be suspended,” Mathieu said.

Health Minister Christian Dube had urged various professional orders of the health-care workers last week to suspend the licences of those who have not been vaccinated.

“I welcome the order's decision,” Dube said on Monday. “The signal is clear, it will not be possible to bypass the mandatory vaccination in the health care sector after Oct. 15.”

The province's doctors order, the College des medecins, had already announced it would suspend the right to practise medicine of any member who refuses to be vaccinated.

Mathieu, however, said unvaccinated members in the public sector could be reassigned to telepractice duties.

“That won't be thousands of employees, however, because we need to make sure they have the adequate skills to do it,” Mathieu said. “But this is the only exception, to our knowledge.”

He added the licence suspensions will remain in effect until proof of vaccination is provided, adding that the nurses' responsibility is to protect the public.

While the province continues to struggle with its nursing shortage, the Quebec government said it remained confident in its decision to impose mandatory vaccination in the health-care network, even as an opposition party and several unions urged it to push back the deadline to avoid potential service breakdowns.

Dube said about 25,000 health workers in the province are still not fully vaccinated ahead of Oct. 15's deadline and that measures to reorganize services will be announced this week.

Mathieu said the order remains vigilant about the consequence of their decision to suspend licenses.

“We are worried about the impact it could have,” Mathieu said about the possibility of a strike or breakdown of services.

In a news release Monday, health officials said hospitalizations fell by six to 290, while the number of patients in intensive care dropped by two to 78.

The seven-day average of cases is 558.

Of the latest reported infections, they said 348 were among people who were either unvaccinated or who had only received a first dose within the past two weeks.

About 90 per cent of Quebecers aged 12 and older have received at least one dose, while 85 per cent are considered fully vaccinated with two shots, said the province's public health institute.

This report by The Canadian Press was first published on Oct. 11, 2021.