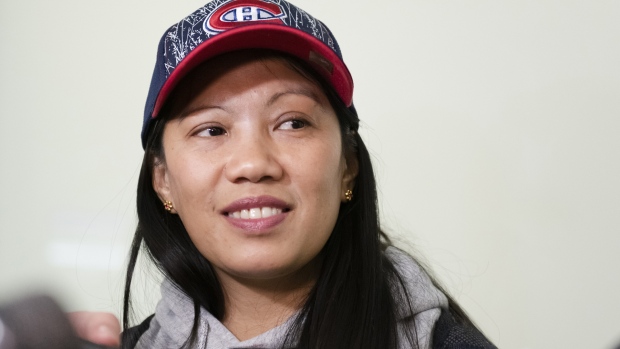 Vanessa Rodel talks to media after arriving at Lester B. Pearson Airport in Toronto on Monday, March 25, 2019. A woman who escaped violence and human trafficking and helped shelter former CIA whistleblower Edward Snowden when he fled to Hong Kong is coming with her daughter to Canada after being granted refugee status, her lawyer said Monday. THE CANADIAN PRESS/Christopher Katsarov

TORONTO -- A newly arrived refugee who helped shelter whistleblower Edward Snowden in Hong Kong pleaded with Canadian officials on Tuesday to grant asylum to others who assisted the American fugitive years ago.

Vanessa Rodel said her excitement at now being in Canada with her seven-year-old daughter Keana was tempered by the knowledge that people with whom she still feels a strong bond have not been so lucky.

At a news conference in Toronto, held hours before she was to travel to Montreal and move into her new home, Rodel said her fellow members of the group that came to be known as Snowden's "Guardian Angels" should be allowed to join her.

"I don't want them left behind," she said of the group of five, who include Keana's father and two half-siblings. "I don't want to feel that I forget about them because I'm here now in Canada. They're still hoping they can come in Canada to feel safe and free."

Rodel and Keana arrived in Toronto on Monday afternoon, two months after the federal government formally granted them refugee status.

Their arrival brought an end to what her lawyer Robert Tibbo described as a saga dating back to 2013.

At that time, when Snowden fled to Hong Kong after divulging classified documents from the U.S. National Security Agency, Tibbo said Rodel and a handful of others banded together to help in the whistleblower's early days as a fugitive.

The information Snowden leaked exposed the scope of massive government surveillance operations. He currently lives in Moscow and is wanted in the United States on charges related to the leaks.

Five other people in the "Angels" group represented by Tibbo -- three adults and two children -- remain in Hong Kong. They had fled Sri Lanka years ago, and their applications for asylum in Hong Kong have been rejected.

Rodel, who went to Hong Kong after fleeing gender-based violence and human trafficking in the Philippines, said the group members all developed an unusually close bond.

"When we are ... facing lots of problems, we always stick together," she said. "We feel like we are family."

The group gained notoriety in 2016 when their existence was revealed in Oliver Stone's film "Snowden," and Tibbo said they have since faced political persecution in Hong Kong.

The so-called "Angels" have been identified as a couple from Sri Lanka named Supun Kellapatha and Nadeeka Paththini, and their two young children. The fifth is Ajit Kumara, a Sri Lankan soldier who deserted the military. Rodel said Kellapatha is Keana's father.

Tibbo and three Montreal-based lawyers set up a group to raise money for his clients. They filed asylum applications on their behalf, and collected about $350,000 for their expenses in Hong Kong and in Canada, should they all arrive as privately sponsored refugees.

Tibbo called on Ottawa to extend the same welcome Rodel and Keana received to the rest of the group.

"Canada needs to step forward," he said. "The government of Canada has done the right thing for Vanessa and her daughter, but really what should have been done is all the families should have been brought into Canada at one time."

But Ethan Cox, spokesman for advocacy group For the Refugees, questioned that claim.

"The government has the ability to intervene and expedite the processing of the private-sponsored refugee claims of the remaining five Snowden refugees," Cox said. "That is what we are asking today is for the government of Justin Trudeau to finish the job."

Vanessa Rodel and her seven-year-old daughter Keana talk to media after arriving at Lester B. Pearson Airport in Toronto, on Monday, March 25, 2019. THE CANADIAN PRESS/Christopher Katsarov