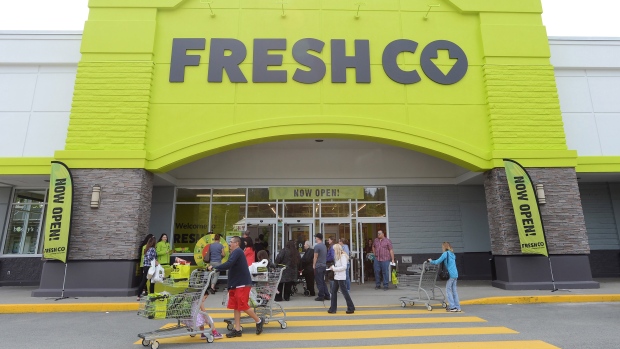 People enter a FreshCo store in Mission, B.C. on Thursday, April 25, 2019. Worrying about being infected with COVID-19 at the grocery store where she works has become part of the job for Kelly Ferguson, who lives with her 90-year-old mother. THE CANADIAN PRESS/Jonathan Haywa

DELTA, B.C. -- Worrying about being infected with COVID-19 at the grocery store where she works has become part of the job for Kelly Ferguson, who lives with her 90-year-old mother.

"I'm terrified of getting my mom sick," said Ferguson, adding that her mother's caregiver stopped coming by five weeks ago so she and her sister ensure one of them is home from work to fill that role.

Ferguson began working at FreshCo last December when Safeway rebranded the store as part of a restructuring by Nova Scotia-based Empire Co. Ltd.

Grocery store employees are considered essential workers during the COVID-19 pandemic. Ferguson said she earns minimum wage of $13.85 an hour, with a recent temporary top-up of $2 per hour after the first 20 hours.

Sobeys, which operates FreshCo and other stores including IGA and Thrifty Foods, is among employers that are temporarily offering so-called hero pay.

"I don't feel like a hero," Ferguson said. "I'm just trying to pay my bills."

She said the strain of constantly keeping her physical distance from customers weighs heavily on her, and other workers deemed essential may face an accumulation of mental health stress after the pandemic.

While most customers have been courteous, some have allowed their frustrations over the shortage of items like flour and paper towels to spill over, including one person who recently threw a jug of milk at a cashier, Ferguson said.

"They're impatient and they're pissed off because they can't get what they want," she said.

Ferguson said employers that are offering extra pay should remember grocery store workers' ongoing contributions after the pandemic by improving their wages.

Sobeys spokeswoman Jacquelin Weatherbee said 75 cases of COVID-19 were identified between April 1 and 20 in its stores across the country, 45 of them in Quebec alone.

She said employees at corporately owned stores, just over half the 1,500 stores the company operates, as well as those at 31 distribution centres are receiving an extra $50 per week, regardless of the number of hours they work, and a $2 an hour top-up after 20 hours.

Most of the franchisee stores, like the one where Ferguson works, are also providing those incentives, Weatherbee said.

"That was put in place so that employees who work minimal hours through a part-time schedule, maybe four hours a week, would still be recognized in a meaningful way," she said.

Sobeys will assess in mid-May how long the extra-pay measure will continue, Weatherbee said, adding the company is limiting the number of customers allowed in at one time and providing personal protection equipment to employees.

"We have been doing absolutely everything we can to increase our access to masks, gloves, hand sanitizer, everything that's needed to keep our employees safe. We were the first grocer to install plexiglass shields in all of our stores across the country."

Loblaw Cos. Ltd. said it has extended its essential pay premium of $2 an hour into May.

In Loblaws stores where an employee tests positive for COVID-19, it says a "deep cleaning" is done overnight. Employees who work closely with someone who tests positive can stay home in self-isolation with pay, it says.

"With the community spread of COVID-19, it's unfortunate but probable that some stores will be affected," the company says in a statement. "That's why we have enhanced our sanitization and protections."

Paul Meinema, national president of the United Food and Commercial Workers union, said some employers are limiting customer numbers but that's been inconsistent.

"We believe that this is one of the biggest difficulties we have and almost uniformly is not done as well as it could be," he said. "We have bunching up in the aisles. We have people who are required to stock shelves but there are other people coming down those aisles."

Loblaw says it has provided its stores with gloves and masks, but it is up to individual workers to decide whether they wear them. It has also installed plexiglass barriers at each cash, limited customer numbers and, like Sobeys, uses floor decals to encourage physical distancing.

"I would reassure people that that is one of the simplest and most effective things we can do to prevent transmission," Henry said.

Prof. Rafael Gomez of the University of Toronto said as non-unionized stores like Costco and Walmart have expanded their food retail spaces, it has led to lower wages elsewhere in the sector.

"Keeping wages and conditions lower than they would be and prices higher for consumers set us up for this reckoning we've had under COVID," said Gomez, director of the university's Centre for Industrial Relations and Human Resources.

In food retail, employees at some stores operated by the same company are unionized while others are not, he said, adding that greater recognition of grocery store jobs should translate into higher pay.

"These are critical lifelines now for the rest of society so these people should be able to get a lot more than they're getting."

Companies in this story: (TSX:L, TSX:EMP.A)