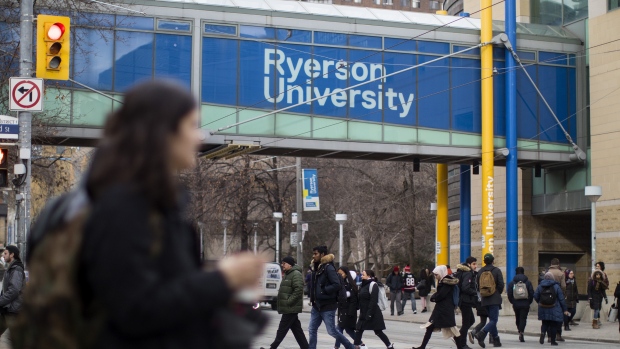 A general view of the Ryerson University campus in Toronto, is seen on Thursday, January 17, 2019. (Chris Young/The Canadian Press)

Ryerson University has requested a meeting with the leadership of its main students’ union over allegations that its executive used the union’s credit card for thousands of dollars of questionable spending at bars, nightclubs and the LCBO.

The Ryerson student newspaper “The Eyeopener” reported that thousands of dollars was charged to the Ryerson Student Union (RSU) credit card since last May.

Credit card statements provided to CP24 by The Eyeopener show a total of $13,000 spent with the card in Oct. 2018 alone.

In a statement, the University says it is aware of the allegations of misspending.

“Ryerson takes these allegations very seriously; however, the RSU is a separate corporate entity from Ryerson and has its own corporate governance structure and Board of Directors. Ryerson has no ability to conduct an independent investigation into RSU finances.”

The school says its president has written to the RSU leadership demanding a meeting to discuss this matter.

Both the president and vice-president of the union have been suspended pending a meeting on Feb. 1, where a financial controller will ask for documentation to provide “context” regarding the spending.

In a statement released late on Saturday evening, the RSU’s board of directors say the credit cards were held under the names of RSU President Ram Ganesh and VP of Operations Savreen Gosal.

“It is currently unclear who the expenses are attributable to. It has been indicated that other members of the executive may have used the credit cards,” the board says.

In the 2018-19 school year, students at Ryerson provided the RSU fees revenue worth $2.5 million.

“The audacity and blatant disregard for our organizations bylaws and policies by members of the executive is not normal nor acceptable in this or any organization,” the board said Saturday.

People are silhouetted on a sunny day while they cross between buildings on a pedestrian bridge at Ryerson University in Toronto on Monday, January 12, 2009. THE CANADIAN PRESS/Nathan Denette