Salaries expected to rise in Canada, but real wages of workers could edge down after inflation 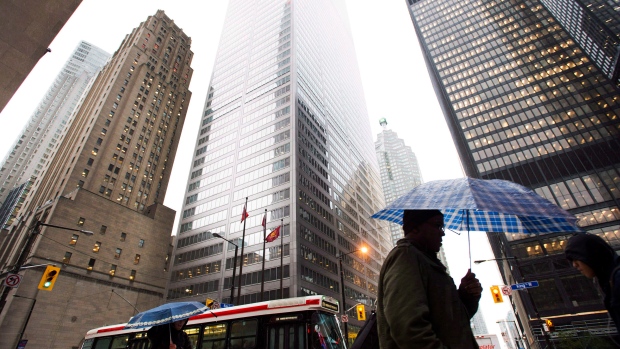 The Toronto financial district is seen in this file image. (Nathan Denette / THE CANADIAN PRESS)

Wages are expected to go up in Canada next year, but workers may not feel the difference if salary gains are eroded by rising inflation, according to a new survey and data released Wednesday.

A LifeWorks survey on the salary plans of Canadian employers showed a projected average annual pay increase of 2.5 per cent for 2022.

When excluding organizations that are planning salary freezes, the poll found average salaries are expected to rise 2.7 per cent next year - the highest in half a decade.

Statistics Canada said the consumer price index for August rose 4.1 per cent compared with a year ago - the largest year-over-year inflation increase since March 2003.

If inflation continues to increase in the coming months, the situation could leave workers unable to afford as many goods and services.

“When we look historically, salary increases have always been above inflation, so there's a net gain,” said Anand Parsan, partner and national practice leader of compensation consulting for LifeWorks.

“But now inflation is outstripping increases in salary.”

Still, the survey found salaries are set to increase at the fastest pace recorded in five years.

“Organizations are scrambling to find and attract talent so they're forced to increase salaries,” Parsan said.

“But organizations have to balance that with their ability to pay and what's going to happen with the economy.”

The Bank of Canada has played down inflation concerns, noting that the factors pushing up inflation like pandemic-related supply bottlenecks are expected to be transitory.

“Much of this is wait and see, and the jury is still out because we're not sure yet if inflation pressures are temporary,” she said, noting that some higher prices reflect a return to normal after prices dropped in 2020 at the outset of the pandemic.

Cooper added that the Delta variant continues to have a significant impact on the economy.

“It's all still highly uncertain,” she said. “Businesses can't afford to push up wages if demand is going to begin to slow.”

Meanwhile, another poll suggests the top priority of some employees may not be a pay raise.

When asked to compare their current priorities to those before the pandemic, the poll conducted with Maru Public Opinion found 31 per cent of working respondents said a job that respects work-life balance is more important to them now.

That compared to only 20 per cent who felt salary had become more important.

The survey also found nine out of 10 remote workers polled hope to continue working remotely some or all days of the week, citing work-life balance as the most important factor.

Meanwhile, the LifeWorks survey found the highest wage increases are expected in the wholesale trade industry, where average salaries excluding freezes are expected to climb 3.1 per cent.

The construction, accommodation and food services, and information technology sectors are projected to see wage increases of three per cent.

According to the polling industry's generally accepted standards, online surveys cannot be assigned a margin of error because they do not randomly sample the population.