Scheer seeks guarantee SNC-related documents will be saved by bureaucrats 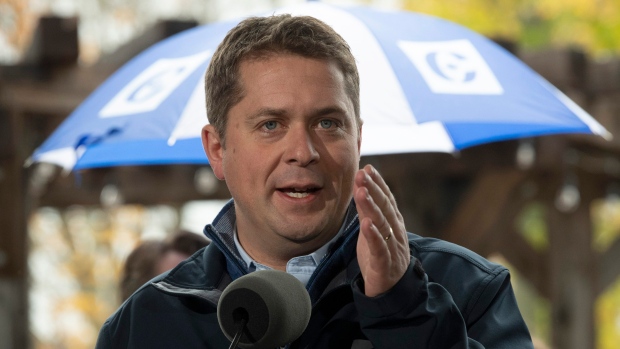 Conservative leader Andrew Scheer responds to a question as he makes a campaign stop in Fredericton, Friday, October 18, 2019. THE CANADIAN PRESS/Adrian Wyld

SAINT-GEORGES, Que. - Conservative Leader Andrew Scheer has written to the government's top bureaucrat to ask him keep a list of any requests he gets to delete records - suggesting that a defeated Liberal government might illegally try to destroy documents related to the SNC-Lavalin affair.

Scheer is reminding the clerk of the Privy Council that all records related to SNC-Lavalin, like other government documents, must be preserved.

Liberal Leader Justin Trudeau has been accused of improperly pressuring former attorney general Jody Wilson-Raybould to head off a criminal prosecution of the Quebec engineering giant.

The letter says that if Scheer forms government, he intends to launch a judicial inquiry into the matter and it will need access to all the records that exist.

It's the second such letter the Tories have sent the clerk this year.

A copy of the letter was obtained by The Canadian Press; a request for comment from the Privy Council Office was not immediately acknowledged.