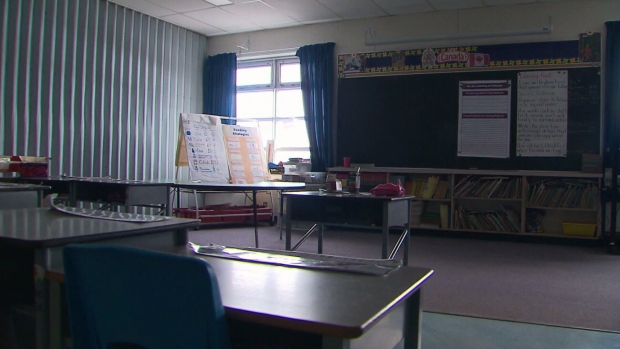 As Canada begins grappling with the issue of recovering from the COVID-19 pandemic, the question of how to safely reopen schools has emerged as a particularly thorny topic. Physical constraints, economic considerations and student needs and habits all seem at odds with public health advice which mandates rigid physical distancing for the foreseeable future. How can schools adapt to the new reality? Some design experts weigh in:

Are today's schools well-positioned to respond to situations like this?

No, at least in most cases. Paul Sapounzi -- managing partner with the Ventin Group architects, who have been designing educational spaces since the 1970s -- said school construction projects have been largely driven by economic rather than public health concerns for decades. In Ontario, for instance, builders work with a strict formula that allocates about 9.2 square metres per elementary-school student and 12.1 square metres per high-school student. Sapounzi said such formulas, which are similar across the country, result in classrooms crowded with upwards of 30 pupils apiece, particularly in urban settings.

"We were trying to create the densest school possible for the least amount of money," he said of past practices. "It's going to be the opposite of that going forward. We need to be based on the ability to adapt easily to possible economic and health disruptions."

What sort of physical distancing measures will need to be in place?

Most provinces are still working that out, having cancelled classes for the remainder of this academic year. But elementary schools were back in session in much of Quebec as of this week, with the province setting a cap of no more than 15 students per class. Claudine Deom, professor of architecture at the University of Montreal, said similar limits will likely be in effect once schools reopen more widely. Administrators, she said, will need to consider how to maintain appropriate distance among students and staff everywhere, from classrooms to playgrounds. Both she and Sapounzi agreed that will be a tall order, particularly in older school buildings featuring enclosed classrooms distributed along relatively narrow hallways and other common spaces with limited functions.

So what should existing schools do?

Sapounzi said schools will need to adopt a number of solutions in order to limit numbers in the building. He said students and teachers alike may have to start attending in shifts, putting in part of their days on school premises and completing the rest from home using e-learning tools to supplement traditional lessons. He also said schools will have to get creative when it comes to using their space, converting places such as libraries, gyms and cafeterias from single-use rooms into multi-purpose areas where lessons can take place. The same principle should apply to school boards, he said, adding many may have to consider redrawing local boundaries and repurposing underused buildings to spread students out if possible. Deom said schools may also have to revisit less-than-ideal solutions used in times when student populations grew beyond the building's original capacity. Portable classrooms and converted trailers, for instance, have frequently been pressed into service until schools were able to add more permanent space.

"There's a history of being resilient and finding solutions to add square metres to schools over the course of the last 10 years at least," she said. "That will probably have to be taken out of the drawers and reused."

How about new schools? Will the pandemic change how they're built?

Sapounzi certainly thinks so, saying the pandemic offers an opportunity to fundamentally reimagine how schools are designed. He said flexibility should be a guiding principle, with spacious common areas built with multiple, frequently changing uses in mind. But he said the social needs of students must also be a key consideration, even in buildings featuring smaller classrooms.

"Perhaps classrooms are a series of open pods along a corridor or around a common space," he said. "It allows smaller groups of 10 to 15 students to interact within those pods, but still has visual and sensory connectivity to the public spaces. That will deter people from feeling isolated, which is what a lot of students are feeling right now."

Sapounzi said new buildings could also create spaces where students could complete distance-learning tasks on school grounds, limiting their time in a classroom without cutting them off from teaching resources.

Are there other public health issues and solutions to consider?

Sapounzi said both old and new buildings would be wise to invest in automated systems to help control lights, doors and other high-touch building functions. Proper humidification, he said, is another measure that could improve public health for all. Additional hand-washing stations may be another important consideration in the months ahead, according to Deom. She said newer schools should also consider drawing on lessons from the past, citing buildings erected in the early twentieth century when designers emphasized the need for natural light and ventilation.

This report by The Canadian Press was first published May 14, 2020.