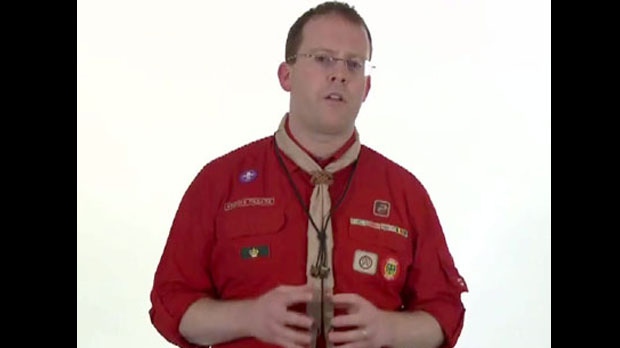 A frame-grab from a video apology by Scouts Canada Chief Commissionner Steve Kent posted on YouTube, date Dec. 8, 2011, is shown. (The Canadian Press/HO)

OTTAWA — A major review of six decades of Scouts Canada records suggests the organization has to fix some problems in the way it handles allegations of sexual misconduct.

The youth group has released the results of a seven-month forensic review of how it handled sexual misconduct in its ranks over a 64-year period.

Scouts Canada asked KPMG to go through all its records after a CBC investigation last fall uncovered dozens of confidentiality agreements that essentially prevented victims from speaking out over the years.

Steve Kent, chief commissioner of Scouts Canada, said the review revealed serious problems in procedures that needed to be fixed.

Kent said, however, there was no evidence of a systemic coverup.

"Policies and procedures weren't always followed and there's no good excuse for that," Kent said in an interview with The Canadian Press.

In the past, he said, sexual abuse allegations were occasionally not reported to authorities, either at the request of the victim or because of a breakdown in procedure.

The report looked at 486 cases of alleged sexual misconduct over the years.

KPMG found 65 cases where the Scouts did not share information with authorities when it first came to their attention.

In the majority of cases, the authorities were the first to be informed, and then passed the information along to the Scouts.

There are still 64 cases in which KPMG is still not exactly sure what happened.

"In hindsight, the governance model in place until approximately 2001 had a profound impact on Scouts handling of sexual misconduct against youth during much of the time of the review," the KPMG report says.

In 2001, the organization centralized its information flow and protocol for dealing with allegations of abuse. Before then, one province's Scouts often had no idea who had been black listed by other provinces.

The review noted that after 2001, there was a major improvement in the length of time it took to deal with allegations.

Kent said Scouts Canada is beefing up its screening and offering counselling to victims, but he also said the audit showed a need for a national child abuse registry.

Overall, authorities were aware of an average of 73 per cent of all records.