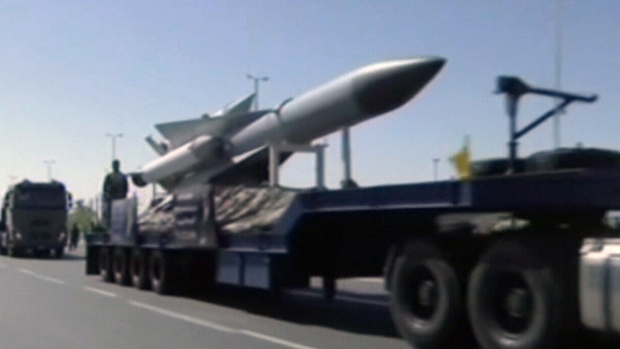 OTTAWA - Ask Hugo Slim about teenaged climate change activist Greta Thunberg, and one thought comes to mind: if only there were a young person like her who was that worried about nuclear weapons.

Slim is the Geneva-based head of policy and humanitarian diplomacy for the International Committee of the Red Cross, and he was in Ottawa recently to meet Canadian anti-nuclear weapons activists.

Those activists are toiling, largely out of the public eye, to persuade Prime Minister Justin Trudeau to treat the possibility of nuclear annihilation as seriously as he does the threat posed by climate change.

They are urging Trudeau to push Canada's NATO allies, who are meeting Tuesday in London, to start talking with non-NATO nuclear states about laying down their atomic arms one day.

Canada doesn't have nuclear weapons but its membership in NATO means it adheres to the 29-country military alliance's nuclear-deterrent policy - that it supports having nuclear weapons in its arsenal essentially because its adversaries have them.

Slim works for an organization that opposes nuclear weapons, and is known for its scrupulous neutrality, so he says he doesn't expect the Trudeau government to suddenly swear off nuclear weapons any time soon. But he wishes someone like 16-year-old Thunberg would come along to get under his skin and tweak the consciences of other leaders who possess or support nuclear weapons.

“There are two big existential issues around the human species at the moment - climate change and nuclear weapons. Climate change has really mobilized young people across the world. Nuclear weapons is still seen as a slightly older persons 1960s, '70s issue. It's hard to galvanize younger people to recognize the risk,” Slim said in a recent interview.

“If you look demographically, through history, you'll notice one thing about political change: that it's always young people that drive political change,” Slim added. “It's about them seeing things and playing roles as political change-makers, as they always have in human civilization.”

The ICRC is trying to build support for the new Treaty to Prohibit Nuclear Weapons, which was negotiated in 2017. More than 120 countries support the treaty, and Slim is hopeful 50 countries will ratify it by next year which would bring it into force. But it has no support among the countries that possess nuclear weapons - including the United States and its allies, including Canada.

Canada has a credible track record in “weapons diplomacy” in part due to the fact it helped lead the international effort in the 1990s that led to a treaty that bans the use of anti-personnel landmines, Slim said.

Slim pointed to what many see as a troubling backslide in international agreements aimed at curbing nuclear proliferation: the Trump administration pulled the U.S. out of the Iran nuclear deal that now includes Britain, France, China, Russia and Germany; and the Intermediate Range Nuclear Forces Treaty between the U.S. and Russia is no more.

Canada should use its seat at the NATO table to at least encourage the first steps towards a non-nuclear world, said Earl Turcotte, the president of the Canadian Network to Abolish Nuclear Weapons, a coalition of non-governmental organizations that was formed in the late 1990s.

Recognizing that NATO isn't going to lay down its nuclear arms soon, Turcotte said the alliance should at least begin talking to nuclear-armed states about a future without the weapons.

Turcotte's organization has sent two letters to Trudeau - the most recent was about two weeks ago - urging him to champion nuclear disarmament as his father, Pierre Elliott Trudeau, tried to do in the twilight of his prime ministership in the early 1980s.

The world is now under renewed threat because of the reversal of decades of incremental nuclear disarmament measures between the U.S. and Russia, including the recently abandoned treaty on intermediate-range weapons. The current New Strategic Arms Reduction Treaty between the U.S. and Russia expires in 2021 and neither country is racing to negotiate a successor, said Turcotte.

Moreover, a new nuclear arms race is now underway with the U.S. pledging to spend $1.5 trillion to modernize its nuclear arsenal over the next 30 years, while eight other nuclear-armed states are now updating and expanding their weapons' delivery systems, including a new generation of hypersonic missiles that are unstoppable with current technology, he said.

“We are moving quickly towards the brink and we're asking the prime minister quite literally to help (do) what he can do personally to engage our allies, as his father did back in the early '80s.”

Peggy Mason, the president of the Ottawa-based Rideau Institute think-tank and a former Canadian disarmament ambassador to the UN, said Canada must work within NATO to at least begin the discussion about disarming.

“This doesn't mean standing up and grandstanding. Starting a dialogue can be at first talking with countries behind the scenes,” Mason told a foreign-policy conference in Ottawa, organized by the Canadian Conference on International Co-operation.

Moments after Mason spoke, the discussion at her panel immediately pivoted back to threat of climate change.

During the recent federal campaign, Trudeau met with Thunberg when he arrived in Canada and marshalled the support of millions of young people who took to the streets to call for action on climate change.

Anti-nuclear campaigners, like Slim and Turcotte, don't disapprove but they wonder what it will take to find a young champion of their own.

“The difficulty here is they can feel the effects of climate change every day in their life. They feel things getting hotter. They feel stronger winds. They care about floods,” said Slim.

Those common occurrences - wildfires, flooding, hurricanes - are left to compete with the increasingly distant historical accounts of the atomic bombs that incinerated Hiroshima and Nagasaki in 1945.

“I think young people aren't as exercised about this as climate change simply because they have not seen evidence of the risk,” said Turcotte.

“Until we have visible evidence, we may not be able to get the kind of engagement we are getting with climate change. But by then, of course, it could be too late. So, we're trying to change that.”