'Seatbelts would have changed everything:' boyfriend of bus crash victim 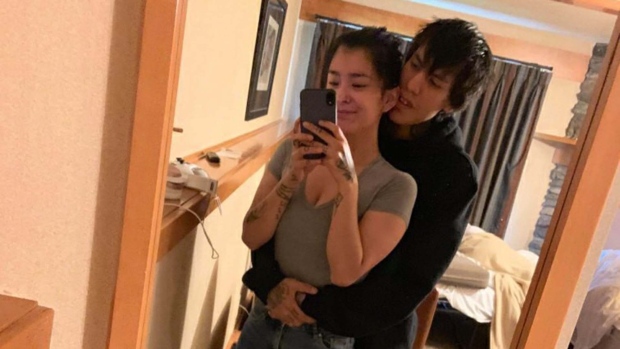 Devon Ernest and his girlfriend Dionne Durocher are shown in this undated handout photo. THE CANADIAN PRESS/HO - Devon Ernest

The boyfriend of a woman killed when a sightseeing bus the couple was on rolled in the Rocky Mountains believes she would still be alive had passengers been wearing seatbelts.

“Seatbelts would have changed everything,” Devon Ernest said Tuesday from his hospital bed in Edmonton before he was discharged.

Ernest, 23, was with his girlfriend, Dionne Jocelyn Durocher, and his cousin in Jasper National Park on the weekend when the trio boarded the big-wheeled, off-road bus to head up to the Athabasca Glacier.

Ernest lived with Durocher, 24, in North Battleford, Sask. He said he planned the trip to Alberta for his birthday and wanted to bring his girlfriend of two years who had never seen the mountains.

The couple had been enjoying themselves taking photographs of their trip. Durocher's favourite part had been canoeing on Lake Louise, Ernest said.

They boarded the glacier bus on what was supposed to be the final day of their vacation. The red-and-white coaches, which look like buses with monster-truck tires, regularly leave from a visitor centre and take tourists up a rough, rocky road onto the Columbia Icefield.

Ernest recalls the bus starting to head down a slope. Next there was the sound of the front wheels sliding.

The last thing he remembers is hitting the roof of the bus, then waking up lying next to Durocher, who was awake but barely breathing.

The bus had rolled about 50 metres down a moraine embankment before coming to rest on its roof.

Thinking Durocher was OK, he ran to find his cousin, who was also injured.

“I went running back to my girlfriend and her eyes were closed and she wasn't breathing,” Ernest said.

“I just lifted up her head and put my sweater underneath her ... I knew she was gone and I just cuddled with her.”

Pursuit, the company that runs the Columbia Icefield tours, said the buses don't have seatbelts, because the vehicles are not approved to drive on the highway and don't go faster than 40 km/h.

“Once the investigation is complete, we will take every recommendation into careful consideration for future operations,” communications manager Tanya Otis wrote in an email.

Durocher was “physically tiny but large in her heart,” her aunt said.

“She might be tiny but she's got a big dream, big heart, to go out and explore, see new things,” said Rose Durocher.

She said her niece wanted to join the army. She had applied for Bold Eagle, a summer military training program for Indigenous youth, but was rejected because she was too small.

The young woman was from the Canoe Lake Cree First Nation in Saskatchewan and wanted to be role model for youth there, her aunt said.

She came from a tight-knit family with five brothers and three sisters. She was the second-oldest and would regularly keep in touch by Facetime after she moved away from her First Nation.

“She was a very compassionate person. She had a lot of friends that she cared about and she would talk to them,” said Rose Durocher. “She was a good listener to her friends and she encouraged them.”

Several family members have travelled to Edmonton as they make arrangements to transport her remains home. A visitation is to be held in Meadow Lake, Sask., this week and a funeral is planned for Saturday in Canoe Narrows.

Three people were killed and 24 survivors, many with critical injuries, were triaged out over several hours and taken to hospital after the crash.

The cause has not been determined, but police have ruled out a rock slide.

The Columbia Icefield is one of the largest non-polar icefields in the world. It spills down from the mountains about 100 kilometres south of Jasper.

Ernest said he is dealing with the anguish of losing his girlfriend, who he said was a profoundly caring person, and the guilt of having brought her to Alberta. He wants answers about what caused the crash.

Ernest plans to return to North Battleford and help gather the clothing Durocher will wear for her burial.

“I just want to see my girlfriend.”

This report by The Canadian Press was first published July 21, 2020

- with files from Lauren Krugel in Calgary.

Devon Ernest and his girlfriend Dionne Durocher are shown in this undated handout photo. The boyfriend of a woman killed when the sightseeing bus the couple was on rolled in the Rocky Mountains believes she would still be alive had passengers been wearing seatbelts. THE CANADIAN PRESS/HO - Devon Ernest