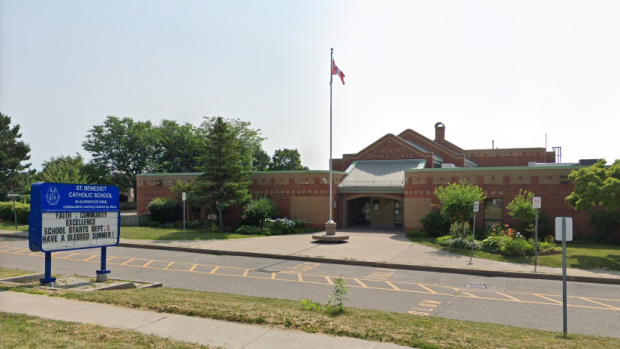 A second elementary school in the York Region Catholic District School Board is now closed due to an outbreak of COVID-19.

Officials say St. Benedict Catholic Elementary School in Markham has four confirmed COVID-19 infections and the outbreak has prompted the board to close the school until Dec. 14.

An outbreak was previously declared at St. Padre Pio Catholic Elementary School in Woodbridge after five cases were discovered and that school will be closed until Dec. 9.

The province says only four of Ontario’s nearly 5,000 public schools are currently closed due to COVID-19 outbreaks, although it is not clear if the closure of St. Benedict is included in that number.

Another 102 cases linked to the province’s schools were confirmed over the past 24 hours.

There are currently 670 public schools in the province with a reported case of COVID-19.

On Sunday, it was revealed that asymptomatic testing at one East York elementary school resulted in the discovery of 19 cases of COVID-19.

In a letter sent to parents yesterday, the principal of Thorncliffe Park Public School said Toronto Public Health detected the cases after 433 tests were processed on Thursday and Friday.

Eighteen of those cases involve students and one infection was detected in a staff member.