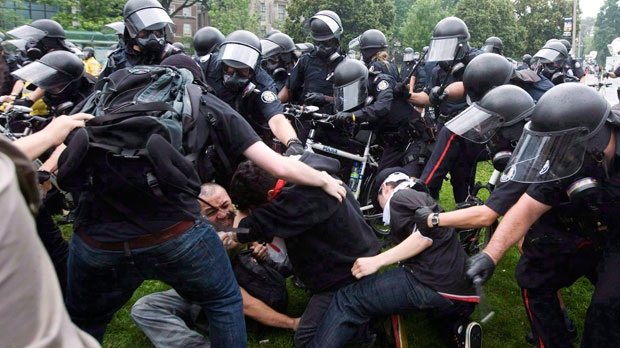 Police surround a group of activists during a protest at the G20 Summit in Toronto on Saturday, June 26, 2010. (The Canadian Press/Darren Calabrese)

TORONTO -- A long-delayed disciplinary hearing is finally slated to start Wednesday for the most senior police officer charged in relation to the mass violation of civil rights during the violence-marred G20 summit four years ago.

Civil liberties groups said they would be keeping a close eye on the month-long proceedings against Toronto Supt. David (Mark) Fenton given the unprecedented detentions of more than 1,000 people and the heavy security expected at next year's Pan-Am Games in Toronto.

Fenton, the major incident commander, faces a total of five charges of unlawful arrest and discreditable conduct arising out of two notorious "kettling" incidents that occurred over the summit weekend.

Fenton ordered officers to box in protesters in front of a downtown hotel. More than 260 people were arrested and taken to a makeshift prisoner processing centre, which came under severe criticism for its deplorable conditions. Some were caged for as long as 26 hours.

According to the allegations against him, Fenton had no legitimate reason to believe the protesters had breached the peace or to order them detained.

On the Sunday, six minutes after coming on shift, Fenton ordered police to keep scores of people -- many of them simply passersby -- standing for hours at a downtown intersection despite a severe thunderstorm that left them drenched and chilled.

"You repeated and maintained these orders notwithstanding the onset of sustained, severe and inclement weather (and) the health and safety risks to the civilians thus contained," the allegation notice states.

It was only when Chief Bill Blair intervened that those still kettled, soaked and shivering in the cold, were released.

Fenton, who repeatedly referred to the protesters as "terrorists" over the summit weekend, has pleaded not guilty. None of the allegations has been proven.

In a statement to civilian oversight investigators, Fenton said he had no option to the mass arrests to make the city safe.

More than 1,000 people were detained over the summit weekend in what is considered the largest mass arrest in Canada's peacetime history. Most were released without charge.

To date, only two constables of 32 officers charged have been found guilty of discreditable conduct arising out of the G20. Another 14 cases were dismissed, withdrawn or stayed. The rest are ongoing.

Insp. Gary Meissner, the only other senior officer to be charged, retired before a hearing could take place.

One officer was criminally convicted of assault. His disciplinary case is on hold pending an appeal.

Fenton's hearing was initially slated to start in November 2012 but has been delayed repeatedly. It was due to begin Monday but was put over until Wednesday to accommodate a lawyer.

A retired judge, Peter Grossi of the Ontario Superior Court, will preside over the hearing. Witnesses are expected to include broadcaster Steve Paikin, who was at the first incident, and human-rights monitors who were arrested and detained.