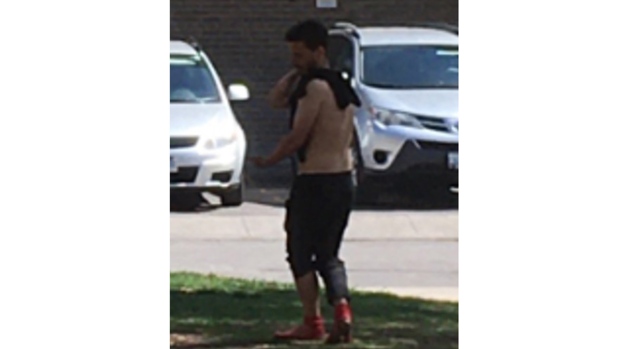 A suspect wanted in a child assault at Toronto's Grange Park is seen on Wednesday, May 11, 2022. (TPS handout)

Toronto police say they are looking for a man who allegedly grabbed a small child by their hair and lifted them off the ground in Grange Park on Wednesday.

Police say they were called to the park, west of McCaul Street and the Ontario College of Art and Design campus, at 3:35 p.m. Wednesday for a report of an assault.

Witnesses told police a man with no shirt on approached a five-year-old child who was playing in the large playground in the park.

He then “picked up the child by the hair,” and was then confronted by several passersby.

The man then walked towards Queen Street West.

He is described as between 25-35-years old, standing five-foot eight inches tall, with a medium build and unshaven face.

He has short brown hair and was wearing a black shirt slung around his neck, black jeans rolled up and red shoes.

Anyone with information is asked to call 52 Division.

His image was released on Thursday.