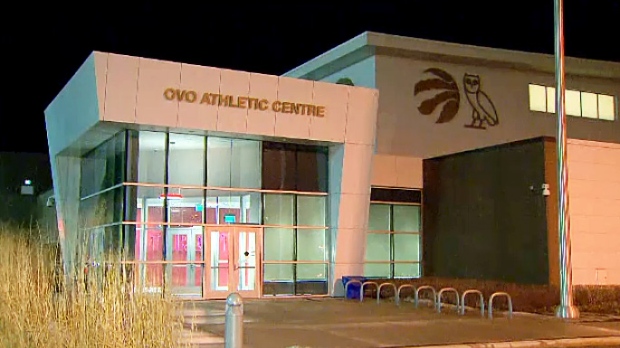 The OVO Athletic Centre is shown in Toronto. The facility is used for practices and training by the Toronto Raptors.

Mayor John Tory says that he has had some preliminary discussion with Toronto Raptors officials regarding the reopening of their practice facility.

The NBA ordered the closure of all team facilities on March 19 but ESPN is now reporting that the league is set to permit the reopening of some facilities on Friday but only in locations where government have loosened stay-at-home restrictions.

In an interview with CP24 on Monday morning, Mayor John Tory said that he has been in touch with Raptors President Masai Ujiri and General Manager Bobby Webster about the status of the team’s practice facility on the Exhibition grounds but is leaving the final decision to public health officials.

He said that the discussions so far have mostly revolved around how the Raptors would operate while ensuring physical distancing protocols are followed.

“We are seeing if we can work something out and we will try our best to do that obviously but there is many precautions that need to be taken into account and many details that have to be sorted out,” he said. “We want to make sure that on the one hand and most importantly we keep everybody safe , including the players, coaches, staff and everybody else, but on the other hand that our team doesn’t fall into a situation where they are at a disadvantage.”

The ESPN report said that teams would continue to be prohibited from holding group workouts and organized activities, even in locations where they are permitted to reopen their facilities.

The network also said that the move is not an indication that the league is planning an imminent resumption of a season that has been on hold since March 11.

Speaking with CP24, Tory did not give any timeline for a decision on whether the Raptors would be allowed to reopen their facility but said to “stay tuned.”

It remains unclear how many team members would benefit from a reopening of the facility as a number of them reportedly left the city following the suspension of the NBA season.

“Obviously the paramount concern continues to be, as it always has been, about everyone’s health including that of the Toronto Raptors themselves and we will sort out with the province whatever seems best in terms of allowing that kind of very limited activity to happen at the practice centre,” Tory said.