Subway, streetcar service back up and running downtown after TTC power outage

Streetcar and subway service is back up an running downtown after a major transit disruption earlier this morning, the TTC confirms.

A hydro vault fire near Richmond and Yonge streets knocked out power on several downtown streetcar routes this morning and suspended subway service on part of Line 1.

Subway trains were not operating between Bloor and Osgoode stations for several hours Tuesday morning but service was restored by 11 a.m.

Byford said crews were delayed in fixing the issue this morning because Toronto fire crews were having trouble extinguishing a hotspot in the hydro vault.

By about 8 a.m., TTC crews were able to get inside the vault to assess the problem.

"I appreciate our customers bearing with us," Byford said.

"It is kind of unlucky because that particular vault serves east-west streetcars as well (as the subway line)."

About 130 shuttle buses were operating this morning replace subway service along Line 1 and streetcar service along King and Queen streets.

Metrolinx spokesperson Anne Marie Aikins says the power issues did not affect GO Transit and added that customers were able to use their TTC fares on the Union Pearson Express and GO Transit this morning in light of the TTC disruption.

"We’ve lost essentially 50 per cent of available roadway due to the streetcars that have come to a stop in certain areas so that is obviously impacting traffic substantially," he said Tuesday morning. 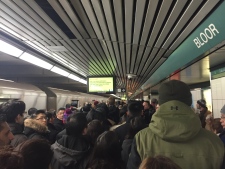 Large crowds are seen on the platform at Bloor Station after a major transit disruption downtown this morning. (Stephanie Smyth/ CP24) 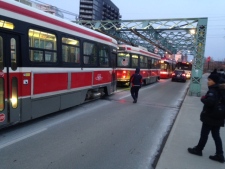 A line of streetcars are seen near Queen and River streets. (Cam Woolley/ CP24)

People board a shuttle bus in the downtown core after a hydro vault fire disrupted streetcar and subway service on Tuesday morning. (Mike Nguyen/ CP24)