A six-year-old Yorkie is being credited with protecting her 10-year-old owner from a coyote in Scarborough earlier this week.

Lily Kwan told CTV News Toronto that she was walking with her dog Macy at a park near their home when she saw the coyote. Just days before, Kwan had seen Facebook posts warning residents about a coyote in the area that was chasing children.

Kwan knew that running from the coyote was not the best idea but said she panicked.

"I didn't really know what to do," Kwan said.

When the coyote got closer to them, Kwan said she dropped the leash as Macy would not follow her.

What happened next was captured on a neighbour's security camera.

In the video, Kwan and her dog are seen running away from the coyote as it continues to chase them.

The coyote is seen attacking and biting the dog as Kwan is heard screaming for help.

"No one heard me. So, I just saw this coyote trying to attack my dog and I tried to ring on people's doorbells and knock on people's doors. This one neighbour actually let me in, and this guy tried to chase the coyote way, and my dog came home," Kwan said.

Kwan, who was traumatized by the incident, praised Macy's actions, saying she is a "super brave dog." 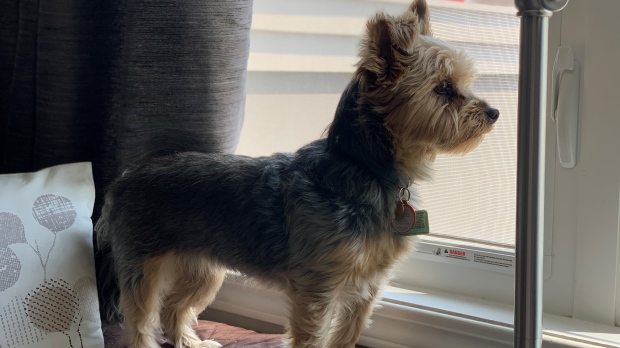 "I love her so much. And I just thought this tiny dog could protect this huge human being, trying to fight off this huge coyote," she said.

Kwan's mother, Dorothy, who was on her way to work when it happened, said she was shocked at how bold the coyote was. She noted that there had been sightings of the wild animal in the neighbourhood.

"I would never guess that a coyote would come out during the day and especially with someone screaming and yelling. It still was not fazed. It just kept coming after her and our dog, despite all the yelling. It was quite aggressive," Dorothy said.

She feels lucky that her family has Macy to protect her daughter.

"She's our little hero," Dorothy said. "My dog would do anything for our family, so I'm actually not surprised that she did that"

The family has set up a GoFundMe page to raise money for Macy's hospital bills.

Macy, a six-year-old Yorkie, is seen in this photo provided by family.