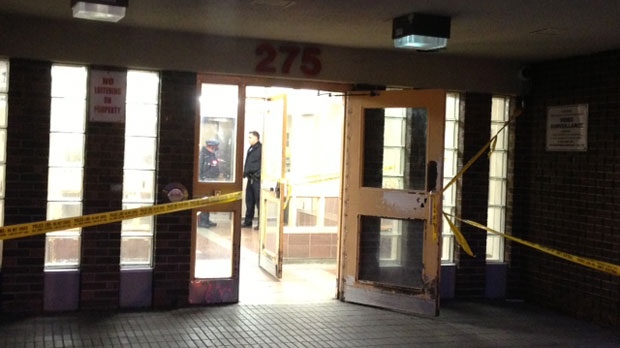 Toronto police have released descriptions of three suspects wanted in connection with a fatal stabbing that took place in the city’s downtown core Thursday.

The stabbings happened at an apartment building at 275 Bleecker St. in the St. James Town neighbourhood around 2:40 p.m. Police received a call to the area, where they found two men suffering from stab wounds in the street. The two were rushed to hospital, where one man died of his injuries. The other remains in critical condition.

Investigators believe the two men were stabbed inside an apartment in the building after a fight broke out. Bleeding, they escaped through an eastern stairwell and started running south on Sherbourne Street, where they eventually collapsed.

Police say they are now looking for three men.

The first is described as a brown or black man in his early 20s, with his hair in cornrows. He was last seen wearing a black leather jacket and baggy jeans.

The second is a black male with lighter skin. He was wearing a light−blue baseball cap, grey jeans and a dark blue and black jacket with a red symbol on the chest and left sleeve.

The third is described as a black male. He was wearing a black jacket with a black hood and black jeans.

A post-mortem examination of the deceased victim is set to be conducted today.