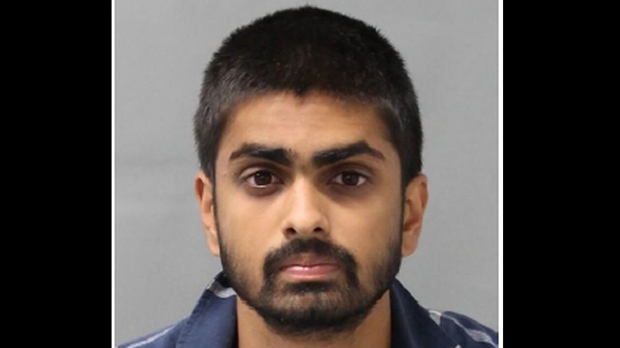 Sohanthen Udayashankar, 22, is shown in a Toronto police handout image.

A man accused of leaving a homemade camera underneath a changing stall in an Eaton Centre clothing stall last weekend has now been identified by investigators.

Toronto police say that on July 6 at about 4 p.m., a male suspect was allegedly seen at a clothing store inside the Eaton Centre.

He allegedly went towards unisex change rooms and placed a small brown rectangular object on the floor, inside the space of one of the change room stalls.

Sometime later, a woman inside the change room stall saw the object on the floor and called mall security as well as police.

Later on Saturday, a 22-year-old suspect was arrested and charged with 10 counts of voyeurism and one count of mischief under $5,000.

On Sunday, police said there was a publication ban in place on the man’s identity but on Thursday named him as Sohanathen Udayashankar of Toronto.

Udayashankar appeared in court on July 7 and was released on bail with conditions.

Investigators say they believe there are other victims who have not yet come forward.

A recording device seized in a voyeurism investigation is shown in a Toronto police handout image. (TPS)