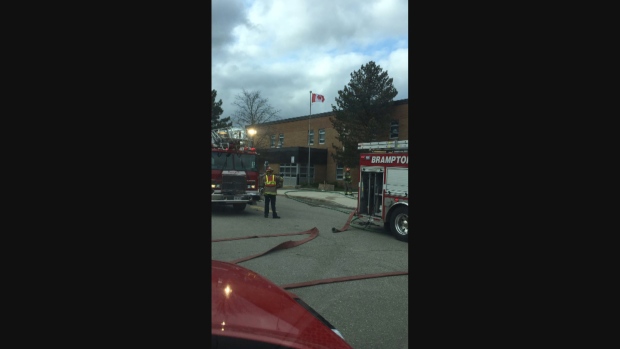 Police say a fire they believed was 'intentionally set' at a Brampton school on May 9 caused $8 million in damage.

Peel police are searching for a suspect believed to be responsible for a fire in a Brampton school on Saturday that caused an estimated $8 million in damage.

Fire crews were called to St. Leonard Elementary School, in the area of Conestoga Drive and Sandalwood Parkway East, at around 5:45 p.m. after black smoke was seen billowing out of the building.

When firefighter arrived, the fire was located in the office area of the school, police said.

The blaze was quickly knocked down, and no injuries were reported.

“Initial investigation has determined that this fire was intentionally set,” police said in a news release.

“The suspect(s) attended various areas inside of the school and caused significant damage to classrooms, electrical systems and other important areas before attending the office area where the fire was set.”

“Our school is a source of much pride to St. Leonard students and staff, past and present. We are shocked to learn of the extent of the damage and that the fire may have been deliberately set,” Celiza Ribeiro, principal at St. Leonard Elementary, said.

“We appeal to the community to come forward with any information that they think may help police in their investigation.”

Police are asking for anyone in the community and those who travelled through the area to check their dash-cam and surveillance footage from May 9 between 4 p.m. and 5:30 p.m.

BFES on scene at a school fire at 185 Conestoga Drive. Multiple fires in the office area. No injuries at this point but heavy smoke in the building. Currently in offensive mode. ^pcZ pic.twitter.com/vdIWL6a0Hc