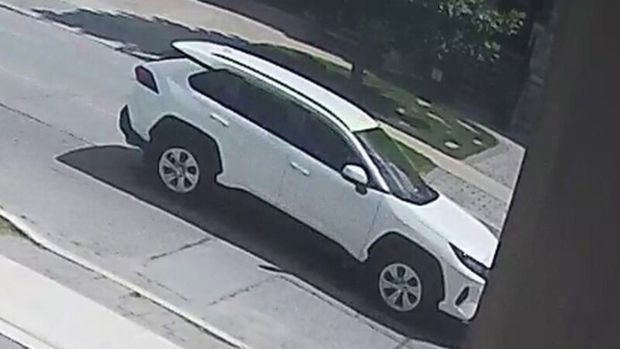 Investigators have released surveillance camera images of an SUV believed to have been used in a North York drive-by over the weekend that left one man with serious injuries.

Police say they were called to Yonge and Florence streets, south of Sheppard Avenue West, on Sunday afternoon for reports of shots fired.

They arrived to find a black Range Rover SUV with multiple bullet holes in it.

A short time later, a man reported to a hospital with a gunshot wound to his leg.

Detectives said Tuesday they believe several suspects pulled up to the Range Rover in a white 2019 Toyota RAV4 and fired multiple rounds into it.

The suspects then sped off westbound, turning north onto Botham Road.

The getaway vehicle reportedly suffered damage to its passenger side window during the encounter.

“Anyone, particularly repair businesses and vehicle rental companies, are requested to report any possible sightings of this vehicle,” investigators said Tuesday.

Toronto police are investigating a shooting in the area of Yonge and Florence on Sunday afternoon. (Peter Muscat)