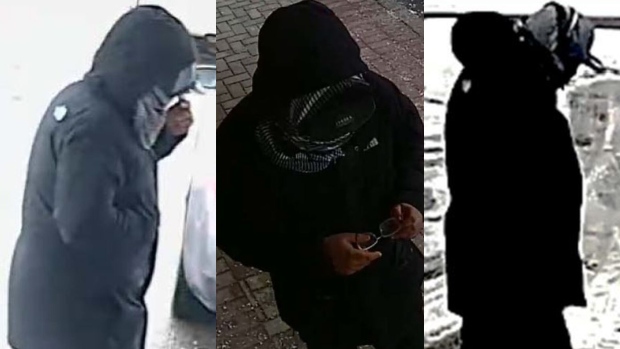 A man wanted in connection with a robbery investigation is seen in these surveillance camera images. (Toronto Police Service)

Toronto police are continuing to search for a man accused of throwing an 87-year-old woman to the ground before robbing her of her personal items, including memorabilia from her late husband.

Investigators said the robbery took place on Feb. 7 at around 2 p.m. inside the lobby of an apartment building located in the area of Keele Street and Sheppard Avenue West.

At the time, the woman entered the lobby and was approached by an unknown man, police said. She was then thrown from her walker onto the ground before her belongings were stolen.

Officers said the suspect fled the scene through the front door of the building.

Police initially released one surveillance camera image of the accused on Feb. 13. Additional photographs were released by investigators on Sunday as the suspect remains at large.

“He is described as being tall, with a heavy build, wearing oval shaped glasses,” police said. “He was wearing a black ‘North Face’ winter jacket, with the hood up, a grey ‘Jordan’ baseball cap, with a gold round sticker on the brim of the hat, a two-tone dark and light coloured scarf covering his face, white gloves, dark pants, and black and white running shoes.”