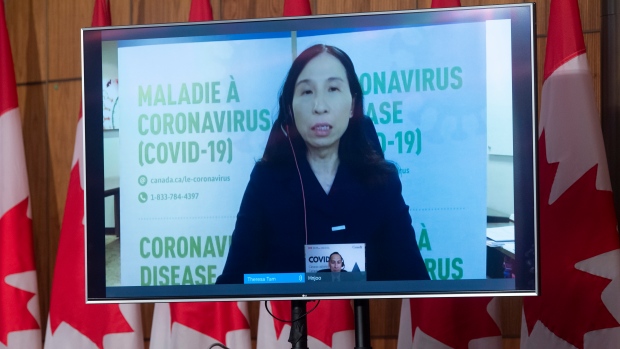 As Canada's COVID-19 vaccination rollout continues to pick up speed, the country's top public health officer is reiterating the importance of receiving a full two-dose series, especially with the latest variant of concern now detected in several provinces.

Dr. Theresa Tam said Friday that the recently dubbed “Delta” variant, which was first detected in India, has been found “essentially across Canada.”

The variant, believed to be behind recent spikes in COVID-19 cases in parts of the United Kingdom, has demonstrated to be more transmissible than previous versions of the virus, Tam said.

Preliminary data released last week from Public Health England suggested that COVID-19 vaccines from Pfizer-BioNTech and Oxford-AstraZeneca were effective against the new variant after two doses, but less efficacy was shown with only one dose.

Sixty-five per cent of eligible Canadians had received at least one dose of a COVID-19 vaccine as of Friday, but vaccine trackers show roughly seven per cent of the eligible population were fully vaccinated.

Tam said the heightened transmissibility of Delta was “obviously a characteristic of concern.”

“(It) means in under-vaccinated populations, or if we let go (of) public health measures ... in the context of a transmissible variant, that variant could well takeoff and replace other viruses in the communities,” she said.

“So it is very important to get that second dose when variants such as the Delta variant (are) in our community.”

Several provinces are speeding up their second-dose rollouts as more vaccine supply pours into the country.

Prime Minister Trudeau announced Friday that large shipments of vaccines will continue through the summer, with more than two million Pfizer doses expected each week until the end of August.

Trudeau said nine million Pfizer doses will arrive in July with another 9.1 million expected in August. He added that Canada has also negotiated an option for three million more Pfizer doses to be delivered in September.

Trudeau said he's been encouraged by the country's vaccine rollout, adding that Canadians have “reason to be hopeful about this summer and fall.”

“The more people vaccinated, the safer we all are.... So let's start looking forward to more of what we love, from camping to dinner with friends,” he said.

COVID-19 cases and hospitalizations continue to trend downward in parts of the country while vaccinations ramp up.

Tam said the latest seven-day average for daily cases in the country was 2,300, down 73 per cent from the peak of the third wave.

Twenty-five million doses of COVID-19 vaccines have been administered across Canada, with 2.8 million Canadians getting a dose in the past week alone.

Data for how many Delta variant cases have been detected in Canada was not available on the Public Health Agency of Canada's website as of Friday. The webpage said PHAC was in the process of updating its graphical view to include the Delta variant.

The webpage said the B.1.1.7 variant, or Alpha variant first detected in the U.K., continues to account for most of the variant cases in Canada, adding that Delta has “only been recently identified and thus is less understood.”

Peel Public Health in Ontario, one of the country's most COVID-ravaged areas, said as of Wednesday 100 cases of the Delta variant had been identified in the region, leading Brampton, Ont., Mayor Patrick Brown to urge the province to prioritize the area for second doses.

Variants of concern are typically identified through genomic sequencing, a laborious and expensive process by which the virus's entire genome is analyzed to detect mutations.

Tam said Canada “does a lot more sequencing than many” other countries, adding that as COVID-19 cases continue to decline, provinces will “(move) towards sequencing a vast majority of the positive cases.”

“Monitoring all variants of concern are very important,” she said. “The Delta variant or B.1.617 has been detected essentially across Canada. It is important then to characterize the exact distribution and the trend as well.”

The U.K. government said in a report last month that both Pfizer and AstraZeneca were 33 per cent effective against symptomatic disease caused by the Delta variant three weeks after the first dose, but that number rose above 80 per cent after two doses were complete.

Dr. Zain Chagla, an infectious disease physician in Hamilton and an associate professor at McMaster University, said in an interview this week that most of the U.K.'s recent Delta cases have been in unvaccinated individuals, with the vaccines seeming to still offer good protection against death and severe disease.

Ontario expanded its second-dose rollout on Friday to include those aged 70 and older and those who received a first mRNA jab on or before April 18.

In New Brunswick, a doctor who faced a barrage of hate and racism after being accused of violating COVID-19 measures threatened legal action if Premier Blaine Higgs didn't apologize for statements made in May 2020.

Dr. Jean-Robert Ngola was accused of violating the province's Emergency Measures Act, but the Crown withdrew the charge Friday after concluding there was no chance of conviction.