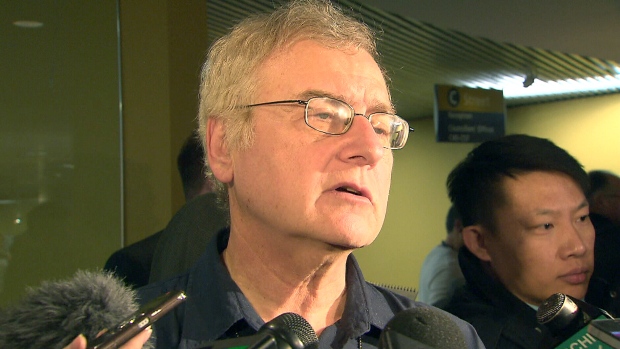 Michael Del Grande is seen at city hall in this file photo.

The Toronto Catholic District School Board has now issued a statement reaffirming its commitment to the safety and support of all students amid concerns over the conduct of one of its trustees.

TCDSB Vice-Chair Michael Del Grande first sparked heavy criticism last month over comments he made at a November 7 board meeting.

As trustees were debating adding new terms to the board’s code of conduct to support LGBTQ students, Del Grande put forward an amendment to add a slew of additional terms to the list, including pedophilia, bestiality, and cannibalism.

He said adding terms like gender identity and gender expression to the code of conduct would allow others to demand that more new terms be added in the future.

“It’s a slippery slope. So this is how slippery it is going to get.”

The former Toronto city councillor, who was once the budget chief under late mayor Rob Ford, once again came under fire this month after The Toronto Star published allegations that he yelled at a 16-year-old student trustee in the trustees’ lounge over her stance against screening the controversial anti-abortion film ‘Unplanned.’

According to the Star, the TCDSB has hired a lawyer to probe the allegations.

Del Grande reportedly refused to provide a comment to the paper, saying that his lawyers had advised him not to speak.

The third incident that placed Del Grande in hot water relates to recent comments he made on an anti-abortion website, Life Site News.

Responding to the criticism he has faced in recent weeks, Del Grande wrote that he would stand up against “evil” and said his supporters view him as a “hero.”

“We are at a critical crossroads,” he wrote in the post published on the site last week. “With modern media, the Internet, and the new gods of consumerism and relativism, our society is inundated with post-Christian elements which have a profound impact on those who identify as Christian.”

While the board’s statement issued Thursday did not mention Del Grande by name, it referenced “recent events” that have caused concern among members of the TCDSB community.

“TCDSB takes seriously its responsibility to ensure all students are safe and supported and that all policies are aligned with the TCDSB’s mission and values. We also appreciate hearing from TCDSB families and students on matters that impact students,” the statement read.

“The TCDSB remains committed to creating inclusive learning environments and school communities that are safe and welcoming, founded on Catholic principles of respect, inclusion, fairness, and social justice, in which every person is valued as a child of God. The TCDSB will continue to ensure that all students feel supported and safe.”

The statement noted that all code of conduct complaints will be brought to the integrity commissioner for investigation.

The statement came just one day after the Ontario Student Trustees' Association (OSTA-AECO) urged the TCDSB to take a “firm stance” in support of students.

“We are extremely disheartened to hear the comments made by Toronto Catholic District School Board Trustee Michael Del Grande. Trustee Del Grande has shown a pattern of disrespect to members of his community, specifically LGBTQ2S+ students, and members of his board,” the OSTA-AECO’s written statement read.

“It is imperative that the TCDSB takes a firm stance in support of students and censures public representatives who make comments which marginalize individuals and entire communities in the publicly funded education system.”