Teachers can discuss issues not included in sex-ed curriculum in private, Elliott says 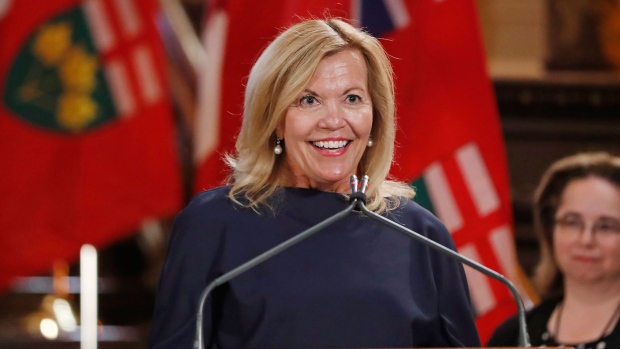 TORONTO -- Ontario's deputy premier says teachers can discuss issues not included in the province's sex-education curriculum with students in private, but not in front of the classroom -- comments that have raised concerns for unions representing elementary and high school teachers.

The newly elected Progressive Conservative government scrapped the province's modernized sex-ed curriculum earlier this month and said schools will use a lesson plan first taught in 1998 while consultations are carried out for a new document.

Critics have said the older version of the curriculum is outdated and doesn't contain material that teaches students about topics like gender identity, consent and cyber safety.

Deputy Premier Christine Elliott said Thursday that if a student asks a teacher questions that aren't covered in the curriculum, educators should have the ability to address them and ensure children receive the supports they need. But those chats should occur in private "rather than a classroom discussion," she said.

"The requirement is that the curriculum be followed," Elliott said. "But of course there's lots of student questions that come to teachers every day. Of course, a teacher is able to have a private discussion with a student to answer the questions."

When asked if those discussions could include topics in the now-repealed curriculum, Elliott said teachers should help put students in touch with appropriate resources.

"They could discuss what the student's concerns are, of course," she said.

"Then it would be up to the teacher to direct the student as to where they could receive help ... But we want students to feel free to speak with their teachers about their personal concerns and then for the teachers help them find the help that they need."

Harvey Bischof, president of the Ontario Secondary School Teachers' Federation, said Elliott's comments are "unhelpful" and do little to clarify what teachers should do to address the gap between the now-scrapped curriculum and the 1998 document.

"Teachers aren't private counsellors," he said. "To suggest that they can privately have these conversations with students is unhelpful and possibly puts my members in jeopardy."

Bischof said the union will give its members advice regarding the curriculum because of the uncertainty around the lesson plan.

"We will provide guidance to our members before the start of September, including advice from legal counsel, in order that our members can do what's appropriate to their ethics and principles ... but also so that they don't put themselves in jeopardy with their employers," he said.

Sam Hammond, the president of the Elementary Teachers Federation of Ontario, called Elliott's comments "unbelievable" and said the government wouldn't have to put teachers in such a position if it had simply stuck with the now-scrapped curriculum.

"I'd say to Christine Elliott and this government that you can't have it both ways," he said. "You can't go back to a curriculum that was developed in 1998 and expect teachers to do what they need to do on behalf of the well-being and safety of students and do that in private."

The chair of the Toronto District School Board said Elliott's comments made her "cringe" as a board trustee and parent, and added that they put teachers in a difficult position.

"The (repealed) curriculum talks about those things openly," said Robin Pilkey. "It's transparent, every kid gets the same information. The idea of a kid having to go off in private to get information seems a bit crazy to me."

Pilkey said her school board, the largest in the province, is still waiting for further direction from the Ministry of Education on the curriculum. The government needs to clarify its expectations quickly, she said, adding that confusing messaging from the province isn't helping.

Meanwhile, NDP Leader Andrea Horwath slammed Elliott's comments, saying that with the proper curriculum, teachers can use questions students ask as a learning moment in the classroom.

"It shouldn't be a dirty secret in a closet," she said. "That's why that curriculum needed to be updated, so that kids feel comfortable discussing these issues and coming forward when there's something not right happening."

Premier Doug Ford has promised provide-wide consultations to build a new curriculum after pledging during the spring election campaign to replace the lesson plan brought in by the previous Liberal government in 2015. Elliott said Thursday that the Tories would start consultation sessions in September.