'The fight is not over:' Hundreds call for defunding of police in Toronto protests

Hundreds of people hit the streets of Toronto Saturday afternoon for two protests calling for the defunding of police.

Demonstrators gathered at Downsview Park for the rally attended by various groups including the organization “Not Another Black Life.”

The rally is in part of a nationwide protest hosted by The Coalition for BIPOC Liberation in support of defunding the police and reinvesting in communities across Canada.

Toronto demonstrators are urging for money to be taken from the police budget and redistributed into communities and other areas in need. 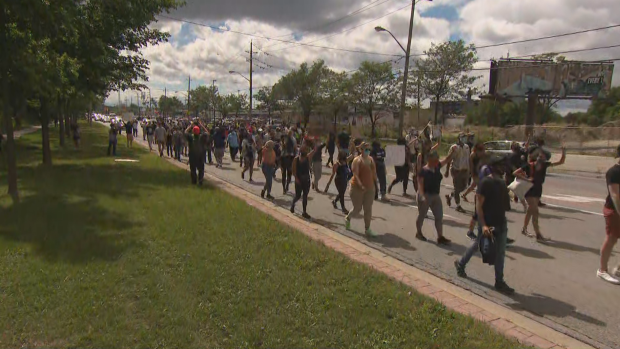 Chris Ross with the group “Afro Indigenous Rising” said protesting for defunding the police amid months of social unrest is exhausting but the movement has to continue.

“It has not only been draining, it’s almost like I’ve picked up a second job. Ever since all this stuff has picked up, it never stops. You’re always seeing new injustices, new things happening,” Ross said.

Another rally was held in downtown Toronto on Saturday afternoon, which began at Christie Pits Park.

Many carried signs reading "Defund brutality, fund humanity," "no justice, no peace," "abolish the police, fund the people," as they marched through downtown streets.

"The fight is not over."

TJ said he is also protesting the Special Investigations Unit's decision not to lay charges against the responding officers in the case of Regis Korchinski-Paquet, the 29-year-old woman who fell to her death from a High Park balcony in May.

Earlier this week, the SIU released a detailed report into their investigation into Korchinski-Paquet's death.

Lawyers for the family acknowledged that the SIU report was thorough, however, they took issue with several points, including the findings of the Ontario autopsy and Martino's legal analysis. 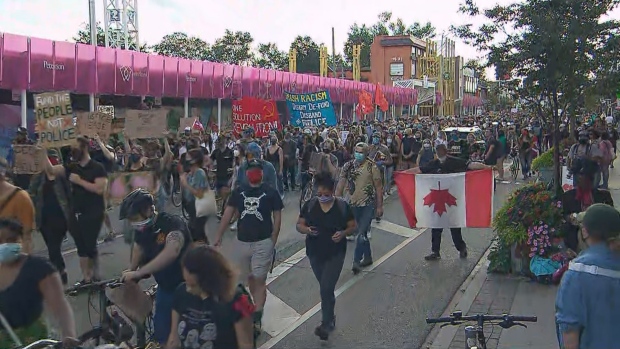 Instead of pouring money into police, TJ said he wants to see funds redirected to create initiatives that would make the community better.

TJ hopes that people who aren't at the protest are looking for other ways to demand change.

"Although I'm happy to see people turn up, I just hope that the people who aren't here this time are fighting this in other ways because protesting is not the only way," TJ said.

"And this needs to be fought in many ways. This is a systematic issue."

For Denise, she decided to attend the protest because of the continuing police violence.

"I could not sit home and be still and not say anything and not do something," she said. "It's just incredibly heartbreaking what's going on."

Denise said she's tired of hearing the news of another Black person shot and killed by police and that these incidents need to stop.

"It's on all of us to do something...to stand up and make a change."

Other Canadian cities participating in protests include London, Montreal, Fredericton, Moncton and Halifax. 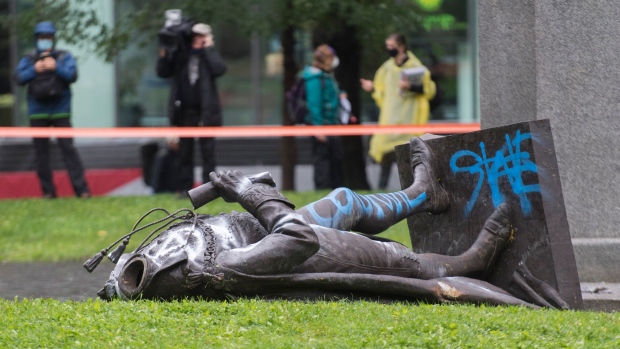 The rallies also come amid anti-Black racism protests south of the border after Jacob Blake, a Black man, was left paralyzed after being shot at least seven times in the back by police in Kenosha, Wisconsin.

In a press release, the Coalition for BIPOC Liberation said the ultimate goal of the protests across Canada is to end systemic racism in all sectors of the government.

“Without the removal of the laws of colonialism, the liberation of Black, Indigenous and People of Colour will cease to exist,” a spokesperson said in the release. “Invest in people, not police. Reallocation Committees will ensure funding divested from police forces will be reallocated back to community-based initiatives.” 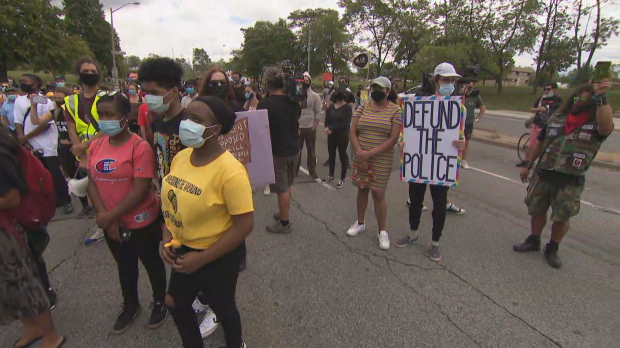 The coalition’s list of demands includes implementing alternatives to policing, investing in the community, eliminating unnecessary laws and disarming and demilitarizing all police officers.

The coalition recommends strategies such as investing in mental health services and safer traffic responses and establishing community-based and trauma-informed emergency services for those who have experienced gender-based violence.

Earlier this month, the Toronto Police Services Board approved body-worn cameras for officers to increase transparency and accountability amid calls for reforming, defunding and even abolishing the police.

The force expects to purchase 2,350 body-worn cameras at a cost of $34.1 million over the next five years.

Some other recommendations brought forward to the board that it also approved include the development of an alternative community safety model to respond to non-criminal calls for people in crisis, and an expansion of mobile crisis intervention teams to 24 hours a day, seven days a week.

- with files from CP24 staff and The Canadian Press