'The kids have been fine.' Only 1.4% of children and teens with COVID hospitalized: stats 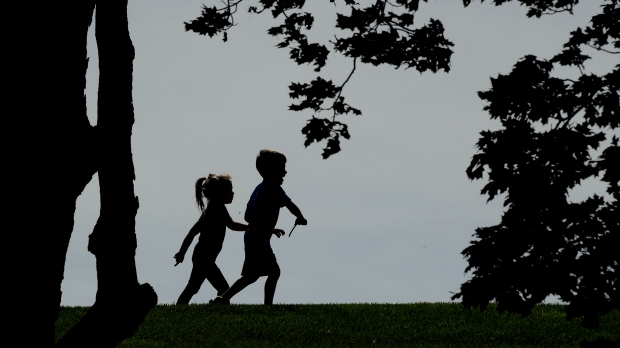 FILE - Kids run through trees at the Liberty Memorial after watching aircraft from nearby Whiteman Air Force base fly over Tuesday, April 28, 2020, in Kansas City, Mo. Statistics from the Public Health Agency of Canada reveal only 1.4 per cent of 10,467 infected kids and teens ended up in hospital with the disease, compared to 13.5 per cent of 84,979 cases involving all ages. (AP Photo/Charlie Riedel)

Early data suggests children are much less likely than adults to develop severe cases of COVID-19.

Statistics from the Public Health Agency of Canada reveal only 1.4 per cent of 10,467 infected kids and teens ended up in hospital with the disease, compared to 13.5 per cent of 84,979 cases involving all ages.

That amounted to 149 patients younger than 20 who were hospitalized between April 1 and Aug. 26, 2020, including 29 sent to intensive care. There's been at least one death in the under-20 set linked to complications from the novel coronavirus, a 19-year-old in Quebec who died in August. However there have been no reported COVID-related deaths in children.

The numbers are included in a joint study still underway by the Canadian Paediatric Surveillance Program that may ease parent fears about the risks of sending kids back to school, says principal investigator Dr. Fatima Kakkar.

“We've been open two weeks in Quebec and there are cases in kids, but we're not seeing a jump at all in hospitalizations.”

Preliminary data from the program, a joint effort by PHAC and the Canadian Paediatric Society, focuses on a slightly younger cohort under 18.

The CPS surveillance program found just 111 children in that age group with SARS-CoV-2 infection have been hospitalized, and of those, 13 landed in intensive care.

Researchers caution the results are preliminary and cover cases that emerged when most schools were closed and most children had relatively little exposure to possible infection outside the home.

They say children and youth should still be monitored closely for symptoms and complications.

Still, the numbers back anecdotal reports that COVID-19 seems to have relatively mild effects on young people.

Among 89 patients for whom the cause of hospitalization was known, just half were admitted because of COVID-19 infection. The rest turned up with unrelated health needs, including surgery, and were only diagnosed by chance through the routine admission process.

“The most surprising is that it was the kids we least expected - they were admitted for fractures or appendicitis ... and then in retrospect, we realized that the kids were very asymptomatic,” says Kakkar.

Much also needs to be known about transmission and who's getting COVID, she adds.

Even if one family member gets it - such as a child infected at school - that doesn't necessarily lead to spread through their household.

Kakkar recalls caring for infant twins, one of whom contracted COVID-19 while the other didn't.

She suspects one reason is that many infected kids don't cough or sneeze as much as infected adults.

“We had moms who were at their kid's bedside for the duration of hospitalization, or they were taking care of their child before, and they wouldn't become infected,” says Kakkar, whose hospital houses the largest neonatal care facility in Canada.

“It might be because a lot of their symptoms are gastrointestinal - so vomiting and maybe a little bit of diarrhea, abdominal pain - that it's not being transmitted in the same way.”

Kakkar says her hospital has had to isolate at least 10 infants born to mothers infected by COVID-19, but the CPSP data does not include undiagnosed cases.

Nor does the interim study include analysis of patients with multi-system inflammatory syndrome in children, known as MIS-C, but researchers say that will be considered in a separate report expected in the coming weeks.

Kakkar says great strides have been made to better recognize and identify the rare condition, an acute inflammatory illness that appears much like Kawasaki disease.

“With all of the cases worldwide they're getting a very good picture of what MIS-C is - what the blood tests look like, what the child looks like, and how they respond to treatment.”

The completed study is expected to include the epidemiology and risk factors for hospitalization, and a look at how children with co-morbidities fare.

This report by The Canadian Press was first published Sept. 11, 2020.