Thousands gather in Toronto for event in support of D.C. Women's March

Thousands of people gathered in Toronto this afternoon in solidarity with the Women’s March on Washington today.

Demonstrations were held across Canada and around the world today, events that organizers say are meant to send a message to the Trump administration about women’s rights.

Kavita Dogra, one of the organizers of the march in Toronto, said she expected 10,000 people to attend today’s event downtown.

“We’ve seen what happened there, we do not want it happening here. Trump-style politics is seeping into Canadian politics and we are here to say that we will not accept that. Divisive politics have no place in Canada.”

A number of guest speakers made remarks at Queen’s Park-- where the group met-- before the crowd marched to Nathan Phillips Square.

A moment of silence was held at 1 p.m.

“The idea is to take a minute and envision what gender equality looks like. There is no nation that has it. Perhaps we don’t know what it looks like. Let’s dream it into existence,” Dogra said.

About 30 similar events have been organized in other Canadian cities, including Ottawa, Montreal and Vancouver. 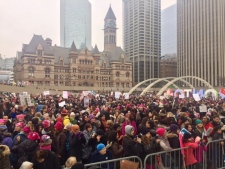