Tens of thousands of people gathered near Toronto’s waterfront Saturday for one of the city's largest - and most colourful - celebrations of the year.

The Scotiabank Toronto Caribbean Carnival’s grand parade is taking over a 3.5-kilometre stretch of Lake Shore Boulevard West, as thousands of costumed revellers and several steel band orchestras entertain thousands of spectators along the route.

Now in its 46th year, the grand parade is the three-week festival’s marquee event, drawing participants and spectators from all over.

To pulsating rhythms and melodies, organizers expected 16,000 people to dance along the parade route in colourful costumes adorned with jewels and feathers in what they say is the largest cultural festival of its kind in North America.

“The reason why I’m involved ... is because it’s another way of giving back, giving back to the people who gave so much to me during my career,” Magloire, a Torontonian, told CP24 reporter Nneka Elliott.

Meanwhile, there are a number of road closures in effect to accommodate the parade.

Lake Shore Boulevard is not expected to fully reopen until the parade ends Saturday evening.

The parade is also responsible for the closures of these Gardiner Expressway ramps, which will remain closed until the conclusion of the parade:

In addition to the road closures, there will also be a number of streets with restrictions to vehicles, including:

With so many people in the city for the event, the festival is a huge money-maker for hotels, restaurants and clubs.

The overall economic impact is said to be in the hundreds of millions of dollars. 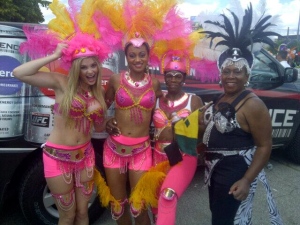 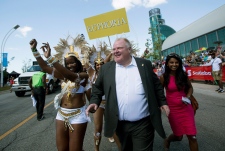 Toronto Mayor Rob Ford shows up an hour late, missing the ribbon cutting ceremony, as he briefly dances with paraders at the The Scotiabank Toronto Caribbean Carnival in Toronto on Saturday, August 3, 2013. (Michelle Siu /The Canadian Press) 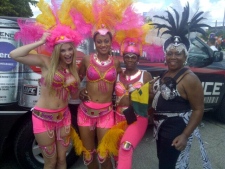