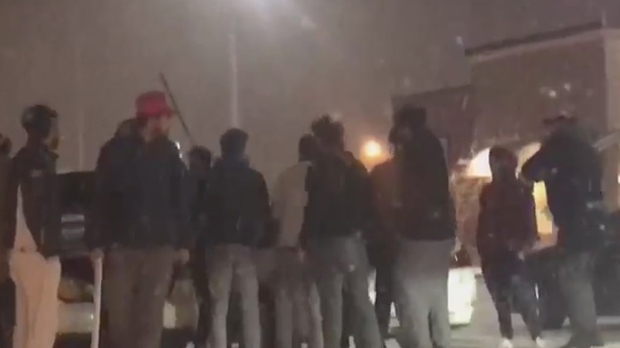 Men with sticks are seen in a Brampton parking lot on Dec. 10 in a screen capture image. (Provided)

Three men have been arrested and charged in connection with a brawl involving men wielding long sticks in a Brampton commercial plaza last Sunday that left one man injured.

Peel Regional Police say they were called to the plaza at Steeles Avenue West and McLaughlin Road at 10:30 p.m. on Dec. 10 for a report of a fight between two large groups of men in the parking lot.

Videos of the incident shared on social media showed a number of men hitting each other with large sticks.

When police arrived, most of those involved had dispersed but they found a 19-year-old man suffering from injuries described as minor.

Police said they interviewed witnesses, collected surveillance footage from the area and spoke to those who filmed the incident on their phones and identified three suspects.

On Friday, three men were arrested and charged.

They were identified by police as Gurpreet Singh, 20, Karanbir Singh, 22 and Harbir Singh, all from Brampton.

They were each charged with one count of assault causing bodily harm.

“This incident had caused a great deal of concern and attention in the community. Peel Regional Police want to ensure the public that these types of incidents will be investigated thoroughly as public safety is our top priority,” Insp. Raj Biring said in a news release.