Toronto and Peel to move to Stage 2 on Wednesday, Premier Ford says

Toronto and Peel Region will be allowed to enter Stage 2 of Ontario’s reopening plan this Wednesday, Premier Doug Ford confirms.

Ford said as of 12:01 a.m. on June 24, Toronto and Peel Region will join almost every other region of Ontario in entering Stage 2, which allows additional businesses and facilities, including restaurant patios, barbershops, salons, shopping malls, and public pools, to reopen.

The rest of the GTA was allowed to move to Stage 2 on June 19.

"Ontario is heading in the right direction because everyone is doing their part," Ford said at a news conference on Monday afternoon. "We are seeing the trends go the right way."

Ontario reported 161 new cases of COVID-19 on Monday, the lowest number of new cases over a 24-hour period since the end of March.

"While our testing continues to be at an all-time high, the number of cases was the lowest it's been in nearly three months," Ford said.

The only region in the province that will remain in Stage 1 is Windsor-Essex, which continues to trace an ongoing outbreak of COVID-19 among migrant farm workers.

"Farmers just aren't cooperating. They aren't sending out the people to get tested," Ford said of the situation in Windsor. "It is not fair to the people of Windsor... it is not fair for the region, the businesses."

"We are planning for Stage 3. We have a jobs and recovery committee that looks at that," she said Monday.

She noted that the province wants to assess the impact of Stage 2 on case growth and hospital capacity before deciding what regions can move on to the next stage of reopening.

"We haven't done that analysis yet because it hasn't been long enough," she said.

Mayor John Tory told CP24 earlier on Monday that people will need to continue to be cautious and follow physical distancing guidelines when the city does enter Stage 2.

"There were some things that happened over the weekend that are a bit of a lesson for us in terms of what we should not be doing when we move to Stage 2," he said, referencing a party that occurred at Cherry Beach on Saturday night. 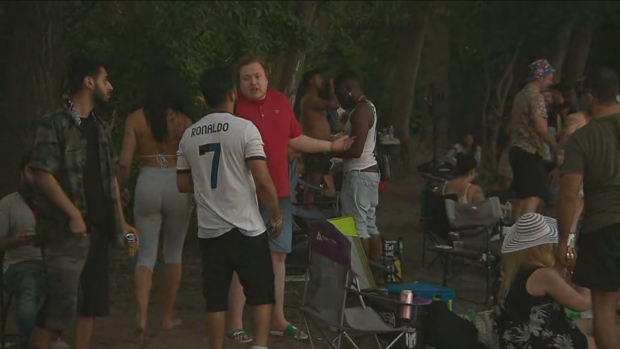 "People have to take some personal responsibility," Tory said. "I understand the fact that a lot of the venues where people would normally be on a warm Saturday night in the summer are closed and the reopening will help with that."

He added that there are some young people in Toronto who seem to have a sense of "invincibility."

"People have to decide that if they don't want to see another uptick in the cases and another shutdown that they have to stop doing this," Tory said.

Ford said he was "shocked" to see the crowds at Cherry Beach over the weekend.

"You look at the pictures, it looked like South Beach, Florida. You see what happened down in Florida, there was 4,000 cases  in one day the other day," Ford said.

"Folks, I get it. You want to get out, (it's a) hot day, there is a beach. We got to maybe come up with better protocols. I'll talk to the mayor about it... we need to get bylaw officers out there."

He added that everyone must continue to follow the advice of public health officials.

"Everyone has to practice social distancing. This fight is not over. We are winning the fight but it is not over by any means," he said. "It could turn and bite us in the backside in about a heartbeat."